SINGAPORE - Bicycles from bike-sharing firms ofo and oBike were thrown into a river by a youth off the Lorong Halus pedestrian bridge in Punggol.

In one Instagram story video, a youth can be seen smiling as he pushes a bike into the river. In the second, what appears to be the same person pushes another bike over the railing of the bridge while smoking a cigarette. A friend nearby is heard warning him about getting "stomped" - referring to the citizen journalism site.

The videos were later widely shared on social media, and the incident was indeed posted on Stomp on Tuesday (July 17). From the videos, it is unclear when the incident occurred.

In response to queries from The Straits Times, ofo said that the incident had been brought to its attention and that it was currently investigating the issue.

"We are also in contact with the Singapore police as well," ofo added.

In response to queries, the police confirmed on Wednesday that a report had been lodged, and said that the 16-year-old boy is assisting with investigations.

The police responded to several public comments on their Twitter account on Tuesday, stating that they were aware of the matter.

"Anyone can provide more information via the I-Witness portal at http://police.gov.sg/iwitness. All information will be kept confidential," the tweets also said.

Hi, the Police are aware of the matter. Anyone can provide more information via the I-Witness portal at https://t.co/vFaLcorhH5. All information will be kept confidential. 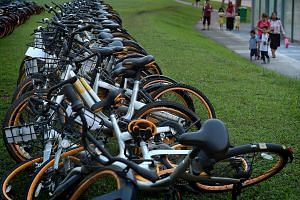 ofo told ST that it encourages the public to report other incidents where bikes have been misused on channels such as ofo's Facebook page and app.

"We are also working with a number of government agencies such as the Land Transport Authority (LTA) and Singapore Kindness Movement (SKM) to roll our user education campaigns that highlight safe and responsible cycling etiquettes," it added.