SINGAPORE - Transport giant ComfortDelGro Corp posted a 4.9 per cent drop in net earnings to $301.5 million for the year ended Dec 31, 2017 on the back of weaker contributions from all but one of its core businesses.

With its taxi division continuing to take a beating from private-hire players, stiff competition in overseas markets and foreign exchange losses, group revenue shrank by 2.2 per cent to $3.97 billion.

Total operating expenses rose by one per cent to $3.56 billion, with staff cost climbing by 2.6 per cent or $37.2 million because of additional people hired for Downtown Line 3.

The Singapore-listed group posted a 0.4 per cent rise in operating profit for its bus and train division, but all other units reported lower earnings.

Taxi operating profit fell by 19.3 per cent to $135.1 million, automotive engineering (which includes fuel sales to cabbies) slipped 33.1 per cent to $33.9 million, and its inspection unit shrank by 6.3 per cent to $32.6 million on weaker performance in its Setsco testing division.

Even its driving centre business posted a 7.5 per cent dip in operating profit to $9.8 million, largely on the failure of its Chongqing school, which has since closed down.

Its operating margin before interests, taxes and depreciation shrank from 21.1 to 20.6 per cent. 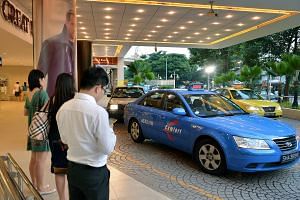 Why a ComfortDelGro-Uber alliance is undesirable in the long run

"The intense competition from ride-hailing apps has taken a toll on traditional taxi businesses everywhere," he said on Tuesday. "We too have not been spared, particularly in Singapore. But we have taken it in our stride, and continue to strengthen our relationship with our driver partners and find ways to improve their earnings."

Mr Yang said the alliance with Uber - which has yet to be approved by the Competition Commission - should "widen the revenue base for our driver partners".

He said about 5 per cent of the group's taxi fleet is currently unhired. The fleet has shrunk by more than 20 per cent to 13,200 since 2014. He said the group would not be buying any more taxis for the 2018 financial year.

"We expect the operating environment to remain tough," Mr Yang added. "We will actively look for opportunities to grow and expand the business, both in Singapore and overseas."

ComfortDelGro's revenue contribution from overseas was 37.5 per cent last year, with operating profit contribution from markets such as UK, Australia and China at 40.4 per cent. This indicates the group's overseas businesses have become more profitable than those in Singapore.

Directors are recommending a final dividend of 6.05 cents per share - unchanged from the year before.

They expect revenue from buses and trains to rise this year (2018), while its taxi and automotive engineering units are expected to decline further.