LTA says cracks in first batch of trains were due to wear and tear, SMRT has fixed 12 of them here

The defective China-made MRT trains in the news are not the only ones to have developed cracks here.

The entire first batch of 19 US-made Bombardier trains on the Bukit Panjang LRT also developed cracks during their service here.

The defects, however, were fixed here, unlike the 26 Chinese trains being shipped back to China to have their aluminium bodies recast.

The affected LRT trains belonged to the first batch of automated people movers to arrive here in 1999.

SMRT Trains managing director Lee Ling Wee said the cracks were discovered "during a routine assessment by Bombardier in 2015".

He said the cracks were also examined by the Land Transport Authority (LTA) and the trains deemed "safe for passenger service".

In total, 19 trains were found to have the defects. Twelve have since been rectified by SMRT, using welding methods.

The remaining seven have yet to be repaired as the cracks on them are said to be less serious. 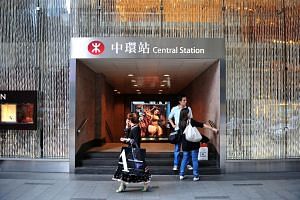 HK govt 'told about train cracks before it awarded contract'

In all, the Bukit Panjang LRT system has 32 trains - 19 from the first batch and 13 added recently.

It is not known what caused the cracks, but an LTA spokesman said they were "due to normal wear and tear". Each crack measured "no more than 12cm", and they were found on the "lateral beams of the underframe". "Cracks may develop over time after years of operations," the LTA said. It added that the defects "are not safety-critical".

Consortium that built MRT trains 'had top score for quality'

The Qingdao Sifang MRT trains were found to have developed cracks because of impurities in the aluminium used to cast the chassis.

The Bukit Panjang LRT system has been beset with technical problems since day one. Despite efforts to improve it, the line remains the most problematic rail system here.

The first batch of trains were made by Adtranz (ABB Daimler- Benz Transportation) before it was taken over by Canada's Bombardier in 2001. They were manufactured in Pittsburgh, Pennsylvania.

The Qingdao Sifang MRT trains were made in Qingdao in China's eastern Shandong Province, in collaboration with Japan's Kawasaki Heavy Industries.

Qingdao Sifang also has a joint venture with Bombardier.

In a statement released yesterday, Kawasaki-Sifang confirmed the flaws. But it refuted online allegations that the group had falsified test results to meet manufacturing standards.

"There is no way to cover up non-conformity to specifications," it said, adding that the allegations were groundless, and that it reserves the right to take legal action against parties perpetrating them.