Just over three years ago, the Transport Ministry removed taxis from the certificate of entitlement (COE) bidding process to take some heat off car bidders.

Now, three years after third-party taxi app provider Uber arrived, the heat is back on.

During last week's COE tender, Uber-owned Lion City Rental submitted more than 800 bids, which accounted for 11 per cent of the total bids made for car COEs. 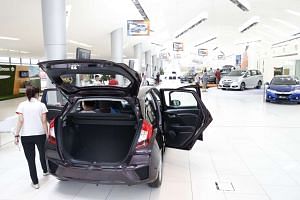 Bumper crop of COEs from May

According to market talk, Lion City is looking to put 1,800 new cars on the road in anticipation of growing demand.

Rival company Grab is also expected to do the same.

The two already have between them some 10,000 cars - mostly old vehicles.

But in recent months, both have started sourcing for new vehicles, and are jostling with private car owners for fresh COEs.

Most of the taxi companies are also starting up private-hire subsidiaries to compete with Uber, Grab and other small players like Smove and Tribecar.

This will only intensify the competition for COEs, which explains why car premiums have not fallen in tandem with the growth in supply.

If the demand for private-hire services continues to grow, taxi operators are likely to shrink their cab fleets and switch. Again, this will fuel demand for COEs.

Most private-hire cars are smaller vehicles, so the pressure will be greater on COE Category A bidders (cars up to 1,600cc and 130bhp).

But some are gunning for Open Category too, such as Lion City.

At the last tender, more than 200 of the company's Open bids were disqualified because they had identical values, which sources said was a move to manipulate the market.

The Land Transport Authority said: "As there were more than 237 bids with the same next lower bid amount, awarding the COE to all these bids would exceed the quota. The 237 unallocated COEs will be carried over to the first open bidding exercise in May 2016."

Car-Sharing Association (Singapore) president Lai Meng said: "The fast growth in the private-hire car services like Uber and Grab is a validation of the sharing economy."