The ride-hailing company borrowed capital from Goldman Sachs Group Inc. and other banks used to purchase more than 1,000 defective Honda Motor Co. vehicles from importers, according to the Wall Street Journal.

Uber managers in Singapore were aware that Honda had recalled the Vezel models when it bought and leased them to drivers, and at least one car burst into flames in January, the newspaper reported.

Uber said it took "swift action to fix the problem" after learning of the car fire and worked with Singapore officials on its response.

"We acknowledge we could have done more-and we have done so," a spokesman for the company wrote in an e-mail.

"Since the beginning of the year, we've proactively responded to six vehicle recalls and will continue to do so to protect the safety of everyone who uses Uber." 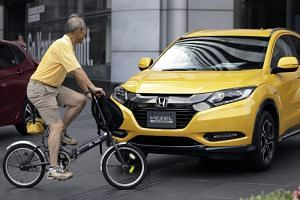 9% of Uber's fleet of Honda cars with fire flaw fixed, according to LTA's records

Bloomberg reported last year that Uber's lease contracts shackled some subprime borrowers to vehicles they could not afford. The San Francisco-based company received a US$1 billion (S$1.4 billion) credit facility led by Goldman Sachs to fund the programme at the time.

In January, Uber paid US$20 million to settle a US Federal Trade Commission lawsuit, saying the company made false or misleading claims about its leasing programme, among other alleged violations. Uber didn't admit to or deny wrongdoing.