A trial of priority cabins on trains will begin next year on one of Singapore's MRT lines, the Land Transport Authority (LTA) announced yesterday.

These cabins are meant for people such as senior citizens, expectant mothers and wheelchair users, though other commuters will not be excluded from the cabins.

The LTA has not said which of the five current MRT lines the trial will be conducted on.

"(The priority cabin) is one way of making our transport system more inclusive," said Senior Minister of State for Transport Janil Puthucheary.

He added that the masterplan is not just about improving transport infrastructure, but about shaping a more gracious commuter culture.

The LTA said: "To further help people who need seats when none are available, we will introduce a new 'please offer me a seat' identifier."

Such identifiers will be available at passenger service centres on all MRT and LRT lines.

These initiatives in the Land Transport Master Plan 2040 report are in line with the goal of making the land transport network more inclusive. 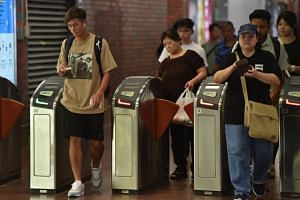 Bus-only roads likely in the future

Some Silver Zones to try out 30kmh speed limit

By the end of this year, all MRT stations will have priority queues for seniors, expectant mothers, wheelchair users and parents travelling with strollers.

This measure will be extended to all bus interchanges and integrated transport hubs by 2021.

And by next year, all buses will be wheelchair-accessible and have stroller restraints.

Other measures include the inclusion of Braille and larger fonts on signs at major transport facilities.

By 2040, all public buses will feature information display panels that will give details on the next four stops in the bus route and information on nearby MRT and LRT stations and lines. The panels will have audio announcements of upcoming bus stops.

The LTA will also work with other agencies to make public infrastructure barrier-free, such as installing lifts at pedestrian overhead bridges. Since 2013, lifts have been built at 47 bridges, with 29 more expected by 2022.

The LTA will work with voluntary welfare groups and other agencies to develop a system to measure its efforts in making public transport more inclusive. It will also form a commuter advocate panel of people with diverse needs, including seniors, those with disabilities, and parents with young children.

A version of this article appeared in the print edition of The Sunday Times on May 26, 2019, with the headline 'Trial of priority train cabins next year'. Subscribe
Topics:
More
Whatsapp Linkedin FB Messenger Telegram Reddit WeChat Pinterest Print Purchase Article Copy permalink