SINGAPORE - Transport Minister Khaw Boon Wan on Monday (Oct 14) acknowledged that rail operators had not invested enough in maintenance in earlier years, but cautioned against overspending in future.

He also warned of regulatory capture, where the regulator - the Land Transport Authority in this case - becomes too cosy with the regulated.

Mr Khaw was speaking at the 8th Joint Forum on Infrastructure Maintenance at the Land Transport Authority's (LTA) headquarters in Hampshire Road, where he emphasised the need to focus on cost efficiency.

"A reliable rail service requires substantial investments, both in capital expenditure for timely renewal of ageing assets, and in operating expenditure to fund operations and maintenance (O&M) adequately," he said.

It also requires a unified approach in tackling rail issues, Mr Khaw added, something which he quickly put in place when he assumed the Transport portfolio in 2015.

He said an "unambiguous One Transport culture" has been key to Singapore turning its problematic rail network around, with reliability at one million train-km between delays - several folds better than what it was in 2012.

"Whether it is MOT (Ministry of Transport), LTA, SMRT, SBST (SBS Transit) or the OEMs (original equipment manufacturers), we share a common goal of delivering a reliable, safe and affordable rail service," he noted.

"We play different roles and report to different employers, but our common customer is the Singapore commuter." 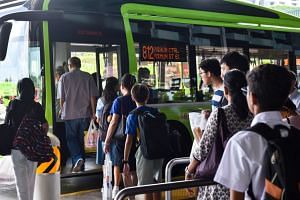 He added: "However, be mindful of the risks of regulatory capture."

He cited the recent Boeing 737 Max incidents, where the United States Federal Aviation Administration failed to ground the defective planes until much later.

The minister said Singapore has corrected the under-investment in O&M "in our recent past history when some operators got distracted".

"We have corrected this but going forward, we can get distracted again or we may even go overboard and 'gold-plate' O&M at the expense of commuters who, at the end of the day, have to fund the operation."

"Regular benchmarking against foreign operators will provide a useful reality check," he added. "Don't be arrogant. What happened could happen again."

Mr Khaw, who is also Coordinating Minister for Infrastructure, said Enterprise Singapore had set up a Technical Committee on Railway Systems.

"They are working with the rail operators to formulate Singapore Rail O&M standards to raise the reliability, safety and productivity of railway systems, as well as building the capabilities and expertise of our local enterprises to service the railway sector in Singapore and potentially the region.

Rail reliability: Who pays and when?

"This will profile Singapore rail engineering and insert ourselves into the global rail industry in a meaningful way."

"He thought out of the box, imagined unpleasant scenarios and prompted us to potential problems, so that we could pre-empt them," the minister said, adding that Mr Tan spoke to him about flooding risk "a couple of weeks before the Bishan (tunnel) flooding in 2017".

On Oct 7 that year, the tunnel between Bishan and Braddell MRT stations was flooded, causing a major service disruption.

It was a result of poor maintenance of an anti-flooding system.