More than 30 affected stations were without power except for emergency lighting.

SMRT said that all affected commuters can seek a refund of their fares in the next 14 days from passenger service counters at any of its MRT stations. 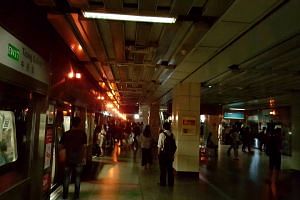 Services on the Bukit Panjang LRT  resumed at 9.47pm.

Four trains on the LRT were stalled between stations and 150 passengers were asked to disembark, SMRT said.

#smrt young and old walked on tracks back to bukit panjang lrt. #unsafe Now cant get bus back becauae too full of stranded commuters

"We are still investigating the cause of the power trip... We deeply apologise for the inconvenience caused," SMRT said.

It added that "checks will be done overnight especially on the Buona Vista power intake station, during engineering hours".

This was how events unfolded earlier in the night.

At about 8.10pm, SMRT said that more than 20 stations across two MRT lines were hit by a power fault.

SMRT said in a tweet then, that was no train service between Joo Koon and Bugis stations on the East-West Line, and between Woodlands and Jurong East stations on the North-South Line.

It attributed the disruptions to a traction power fault.

[NSEWL] No train service between #JooKoon and #Bugis on EWL, between #Woodlands and #JurongEast on NSL due to traction power fault.

Free regular bus services were then made available between Joo Koon and City Hall stations, and between Kranji and Jurong East stations, SMRT added.

It also tweeted an online guide to alternative bus services.

Ms Pauline Wong, who was at Boon Lay station, said that passengers were asked to take a free bus service.

The train was "not moving"and there was "no air con in the carriage", she told The Straits Times in a Facebook message.

There was also a blackout at the Boon Lay MRT station , and the shops were dark, she added.

He posted a photo of a darkened train platform where a train had stopped at 8.06pm.

SMRT power trip. This is at Dover MRT station pic.twitter.com/3rmYRVe118

The power was "on and off for around 10 mins", said Ms Stella Poh.

Mr McRhon S. Banderlipe said that he was in Botanic Gardens MRT station when the power tripped and his train stopped.

Meanwhile, Mr Shou Karasuma said his train on the North-South Line towards Jurong East had been travelling at a slow speed.

"Expect crowding at some stations and congestions as trains are travelling at a slower speed," the transport operator tweeted at 8.34pm.