Police arrested a 17-year-old for drink-driving early yesterday morning after he lost control of his car.

They were alerted to the accident, which took place in Teck Whye Avenue, towards Choa Chu Kang Road, at 1.08am.

According to Mr Deepan Raj, 44, who witnessed the accident, the car had been travelling at a high speed along the road when it skidded and hit the railing on the centre divider just before a pedestrian crossing.

The impact against the railing caused the car's front bumper to be dislodged, he added.

The car continued to spin and its rear hit the left road kerb before it landed on the grass and bushes next to the road, Mr Raj said.

Mr Raj, who alerted the police, told The Straits Times that he had been sitting at a coffee shop across the road when the accident happened in front of Block 4, Teck Whye Avenue.

"The white car was going quite fast and was making screeching sounds. It seemed like the driver had already lost control for some time," he said. 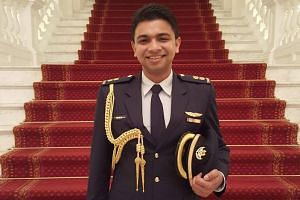 The Straits Times understands that the teenager, who does not have a driving licence, was alone in the car when the accident occurred. He did not suffer any injuries.

Mr Raj sent a video to citizen journalism website Stomp, which showed the car on the grass and bushes next to the road.

The police are investigating the accident. Choo Yun Ting