An all-electric taxi firm will officially become Singapore's seventh taxi operator from today - and the first new entrant in the sector since Prime in 2007.

HDT Singapore Taxi (HDTT), which was operating on a temporary licence for the past two years, has been given the green light by the authorities to expand its fleet from 100 to at least 800, in a market battered by stiff competition from ride-hailing apps. This had seen the taxi population tumble nearly 25 per cent in the past few years.

With operators such as ComfortDelGro and Trans-Cab also indicating that they are looking to grow their fleets again, experts say the latest development indicates that the exit of Uber earlier this year has given the taxi industry some breathing room.

After being awarded a full-fledged Taxi Service Operator Licence from the Land Transport Authority (LTA) yesterday, HDTT will be required to have a minimum fleet of 800 electric cabs by the end of July 2022.

HDTT had been operating with a temporary licence as part of a government-supported trial to explore the use of electric vehicles in a fleet setting. The company applied for the full licence, which lasts for 10 years, in January. Announcing its decision yesterday, the LTA said that HDTT's past performance and capabilities had shown that it was a viable business and could operate as a full-fledged taxi service.

Singapore Management University's Assistant Professor Terence Fan said the head-on battle between Grab and Uber resulted in prices being depressed and increased the supply of private-hire vehicles on the roads. 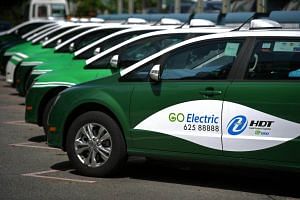 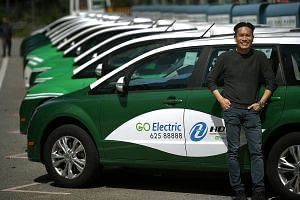 "This temporarily impacted the taxi industry adversely. The competition is gone for a little bit, fares are up again and taxi drivers have breathing space," Prof Fan said.

National University of Singapore transport researcher Lee Der-Horng said that taxi companies may be feeling optimistic with the departure of Uber and many private-hire drivers dropping out of the industry after a vocational licence framework took effect.

The impending entrance of Indonesian ride-hailing giant Go-Jek, however, will intensify competition again, especially if the company dishes out generous subsidies and cabbies swing to driving for them. "It could be back to square one," said Dr Lee.

Meanwhile, with its new full-fledged licence, HDTT's current fleet of 100 e-taxis, which are classified as research vehicles, will no longer be tax-exempt. The firm has up to the end of the month to register them as regular taxis, said the LTA. Despite this, HDTT's managing director James Ng said that by growing its fleet, the firm can "reap economies of scale, allowing the business to be sustainable".

Mr Ng said the company plans to add another 100 of the Chinese-made BYD-brand taxis to its fleet by the second quarter of next year.

Besides fulfilling quality of service and taxi availability standards, the LTA said that "HDTT will have to ensure that sufficient charging stations are set up islandwide to support its fleet". Mr Ng said there are currently 75 charging stations, and he is looking to add more.

While other taxi operators rent out their vehicles at a daily rate, HDTT will continue its practice of employing drivers. HDTT's taxi drivers get a starting monthly pay of $1,900, inclusive of Central Provident Fund contributions, and if they hit a revenue target of $7,250, the gross salary with CPF is $3,400.