With the growing prevalence of third-party booking apps and private hire cars, taxi companies are finding new ways to fight the competition - from lucky draws for their cabbies to partnering with app providers.

Industry observers said that, as more commuters turn to the likes of GrabTaxi and Uber, taxi operators are likely seeing their own share of bookings fall.

While the operators declined to reveal figures, taxi drivers who spoke to The Sunday Times said they are now receiving fewer booking calls from their companies.

Cabby Patrick Lim, 50, said: "In the past, we would get bookings from the dispatch system every three minutes during peak hours. Now, it's 20 minutes or more." 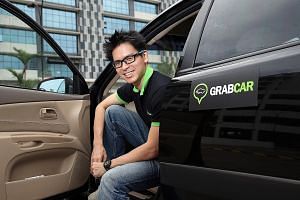 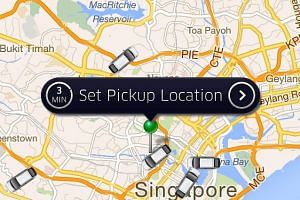 For bigger players such as ComfortDelGro, which took a record 35.6 million bookings last year, half of which came through its own app, the loss from booking commissions could be significant, said observers.

The company, which has a fleet of more than 17,000 under its Comfort and CityCab brands, takes a 30-cent levy for each booking.

SIM University adjunct associate professor Park Byung Joon said: "Every call that a customer makes to GrabTaxi instead of Comfort, for example, there is a loss of revenue."

But cab operators are upping their game. ComfortDelGro announced earlier this year that it had revamped its booking app with new functions, such as fare estimates. In an apparent bid to get its drivers to be more responsive to its bookings, it has been running a lucky draw since September.

Meanwhile, SMRT, the third- largest operator with more than 3,500 cabs, has entered into a partnership with Hailo, a third-party booking app. Most cab companies are also in talks with Karhoo, an app expected to launch next year. The app will allow commuters to book taxis from any operator.

Operators also face the prospect of more of their cabs being left unhired as drivers switch to being private hire drivers for UberX and GrabCar. It is estimated that around 2,000 of the more than 28,000 taxis in Singapore remain idle.

SMRT spokesman Patrick Nathan said that while the firm has been maintaining its taxi hired- out rates, it is "actively" introducing schemes to recruit drivers. Cabbies who recommend new drivers to join get monetary rewards. Newcomers who take their vocational licence with the company also get incentives if they stay on as hirers.

A version of this article appeared in the print edition of The Sunday Times on November 08, 2015, with the headline 'Taxi companies: Raising their game to fight back'. Subscribe
Topics:
More
Whatsapp Linkedin FB Messenger Telegram Reddit WeChat Pinterest Print Purchase Article Copy permalink