Time has run out for home owners in a 54-year-old walk-up apartment block in Tanjong Katong Road.

They had until the end of yesterday to move out of their homes and surrender their properties - which has been acquired to build the upcoming Thomson-East Coast Line's (TEL) Amber Station - over to the Singapore Land Authority (SLA).

The other units have been handed over to the SLA. 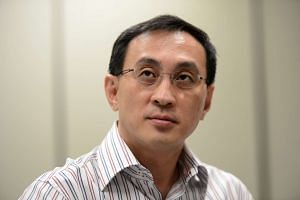 The block holds nine units - including a provision shop on the ground floor. Four units, including Sin Aik Provision Store, are owned by Mr Sim.

The SLA, which takes legal possession of the property from today, will serve an enforcement notice on Tuesday to the Sims and Chengs, giving them 28 days, or until May 31, to move out or SLA will take legal action to evict them.

Mr Sim, Mr Cheng and three other owners are seeking higher compensation from the SLA. They have filed appeals with the Appeals Board (Land Acquisition) and the case is pending.

Mr Cheng told The Straits Times that SLA's compensation offered to him and his neighbours - between $1.4 million and $1.6 million each or about $1,000 per sq ft - was too low.

Mr Cheng added that the owners' valuers gave them a price of $1,500 per sq ft or about $2.2 million per unit, based on the "development potential" of the site.

SLA's valuation is based on market value of the property on the date of gazette.

While their appeal is still pending, all the owners have accepted compensation. The Straits Times understands that should their appeal be successful, they would receive an additional payout.

The apartments and six adjacent semi-detached homes were gazetted for compulsory acquisition in August 2014. SLA offered property owners a total of $45 million for the land. The six semi-detached home owners accepted compensation and are moving out.

Initially, the Sims and Chengs had refused to move until they knew the outcome of their appeal.

Yesterday, they met SLA representatives and asked for more time to move out.

"I want until October to move out... We have a lot of goods to move out and need to look for a new shop space. We need at least three months," said Mr Sim Kim Teck, 65, who runs the provision shop with the elder Mr Sim, his brother.

Mr Cheng said he could not afford an equivalent property in the area with the current payout. He also said he needed more time to look for a flat elsewhere.

An SLA spokesman said Mr Sim's and Mr Cheng's request could not be granted as "as this will delay the construction of Amber Station and the opening of TEL beyond 2023".

He said units at the King's Mansion condominium, across the road from the walk-up apartments, were transacted at prices ranging from $1,100 to $1,200 per sq ft in 2014.

"But of course, not all properties will have the same features," he said, adding that a "like-for-like" comparison would be impossible.