Commuters in Singapore can plan, book and pay for their journeys here across a variety of transport modes with a new app by a local start-up.

The app Zipster was launched yesterday by mobilityX, a start-up backed by transport operator SMRT, as well as Toyota Tsusho, the general trading arm of carmaker Toyota.

The start-up has partnered a number of companies - including SMRT, ride-hailing firms Grab and Gojek, car-sharing service Smove and bike-sharing firm Anywheel - to offer their services on Zipster.

The app features an integrated mobile wallet that can be used for rides across these services.

The start-up is also introducing a card that can be paired with the wallet.

The firm has teamed up with insurance provider AXA to insure users across these different transport modes, and has signed an agreement with OCBC Bank to integrate its payment modes within Zipster. 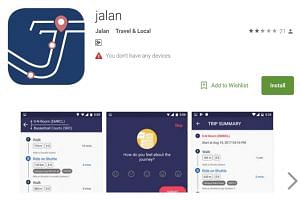 Mr Lim said the app is in line with the idea of "mobility-as-a-service" (MAAS) - a term referring to the concept of multiple shared transport modes being offered through a single platform.

The idea of MAAS is gaining currency here, he said, noting its inclusion in the 2040 Land Transport Master Plan. There is a need for such a platform as studies show people's transport habits have changed, with some making as many as six different trips a day, said Mr Lim, who was previously a managing director with SMRT.

In the long term, mobilityX is looking at offering subscription packages that would allow travel across a variety of transport modes at a flat fee. It is also looking to expand into other countries in the region, he said.

Zipster's launch follows Grab's announcement last week that it will include a public transport journey planner in its app here.

Uber has added public transport and e-bike options within its app in certain markets.

More firms are offering such options as there is a market for services which address a variety of transport needs, especially in emerging markets, said Singapore University of Social Sciences transport economist Walter Theseira.

"There is real value-add in integrating services through a single point of payment," he said.