Interim measures to stay in place until probe ends; Uber platform to continue until May 7

The Competition and Consumer Commission of Singapore (CCCS) has issued orders to stall Grab's takeover of Uber's operations here.

In a statement yesterday, the CCCS said its "interim measures directions" will remain in place until it completes its investigation into ride-hailing group Grab's acquisition of its American rival's South-east Asian business.

The CCCS did not say when it will complete its probe, but said that the Uber platform -which was originally scheduled to be deactivated on April 8, but later postponed to April 15 - should continue until May 7.

It explained that its move was meant "to keep the market open and contestable". Measures include requiring Grab to remove exclusivity obligations on drivers, preventing Grab from making use of Uber's operational data to enhance its market position, and preserving pre-acquisition fares and driver commission.

The CCCS also said that drivers who rent a vehicle from Uber-owned Lion City Rentals "are free to drive for any ride-hailing platform". Observers said this clause has implications for taxi giant ComfortDelGro's pending deal to acquire 51 per cent of the car rental firm - a deal that it may not go through with now.

The CCCS also said Uber users must be offered "customer support to handle contractual and payment issues" until May 7.

Industry watchers are unsure how this can be enforced as the American company has already pulled out of the region. 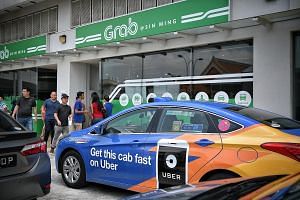 National University of Singapore transport researcher Lee Der-Horng said he does not see how that is possible.

"Uber has been very clear that it has exited South-east Asia, with no more assets or staff," he said. "What does this mean to consumers? I think this means that we should no longer expect the same level of funding, operations and customer support on the Uber app to be what it was before."

He added that passengers and drivers would be better off moving to alternative platforms "sooner rather than later".

Grab Singapore head Lim Kell Jay confirmed that Grab has agreed to extend the Uber app to May 7.

He said: "We trust that the CCCS' review takes into account a dynamic industry that is constantly evolving, highly competitive, and being disrupted by technology and new services. The interim measures should not have the unintended effect of hampering competition and restricting businesses that have already been investing in the country over the years."

The CCCS said the interim measures were necessary because the two companies "are each other's closest competitors and have a significant combined market share".

It added that newcomers may not enter the market because "barriers to entry are likely to be high due to strong network effects".

In a statement following that from the CCCS, the Land Transport Authority said that it supports the interim measures.

"LTA is in the process of reviewing the broader regulatory framework for the point-to-point sector, including studying how to structure the sector and license private-hire car booking service operators," it said.

Singapore University of Social Sciences transport economist Walter Theseira said that ultimately, it would be hard to undo the Grab-Uber deal.

"There is no effective means of stopping Uber from walking away," he noted. "Companies are limited liability, and the extent of the leverage is just the financial penalty - which is meaningless to a wound-up firm."