SINGAPORE - Energy provider SP Group has rolled out its first batch of electric vehicle charging points, in time for ride-hailing firm Grab to plug into a fleet of electric cars.

The 38 points - 19 43kW alternate current (AC) chargers and 19 50kW direct current (DC) chargers - are high-speed chargers able to power up a mid-sized electric car within an hour, compared with six to eight hours via household chargers.

SP said on Wednesday (Jan 9) that the points are located at eight locations across the island, with all sited near food centres to allow drivers to take a break while their cars are being juiced up.

Users can locate and access available charging points via the SP app, which can be downloaded from the iTunes App Store and Google Play.

The app includes a function which alerts users when charging is completed, and facilitates payment via DBS and POSB cards. Cards from all major banks will be included soon, SP said.

The AC system will charge a mid-sized car in 45 to 60 minutes, while the DC charger will do so within half an hour or so. SP said it plans to introduce 350kW chargers "over the next few years". 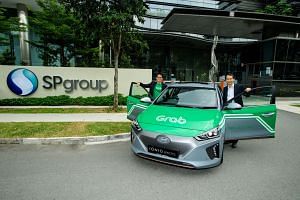 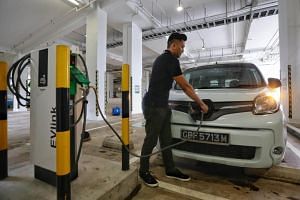 Charge of the electric vehicle brigade in Singapore

These can fully charge high-performance e-cars in about 15 minutes.

Currently, rates are 41.4 cents and 47.3 cents per kWh for its AC and DC chargers, respectively. At these rates, SP said electric car drivers will see "at least 50 per cent cost savings" compared to those who drive comparable petrol-powered models.

But The Straits Times understands Grab will have discounted rates for drivers of its electric fleet.

The company is expected to take delivery of 20 Hyundai Kona Electric crossovers this month. These cars - with a range in excess of 400km on a full charge - are part of 200 units Grab has ordered.

The ride-hailing firm announced last August that it would introduce the cars as part of a partnership with SP Group.

When contacted on Wednesday, Hyundai agent Komoco would only say that it had sold some Kona Electric cars to Grab and taxi operator ComfortDelGro. It will unveil the car at the Singapore Motorshow on Thursday.

With seven new battery-powered models due to be launched here this year, the percentage of electric cars is set to rise from its currently negligible share of less than 0.1 per cent.

But industry watchers said consumers - the vast majority of whom live in high-rises - will consider switching only when a sizeable public charging network is in place.