While the higher departure and airline fees at Changi Airport will go towards funding the Changi East development which includes Terminal 5, not everyone is a fan of the move.

Budget travellers, airlines and the International Air Transport Association (Iata) yesterday expressed their misgivings about the plan to raise fees from July 1. Business and luxury travellers seemed less bothered, if a quick check with those passing through Changi Airport yesterday was any indication.

Indonesian entrepreneur Edward Sojono, 35, who visits Singapore four times a year, mainly to shop, noted that the increase in departure fees by $13.30 could translate into a 10 per cent jump in his airfare.

"I would either have to shop less or come less often," he said.

Sales operation manager Alaina Jenkinson, a 32-year-old American based in Hong Kong, also found the move off-putting, and said she was unlikely to pick Singapore for leisure trips.

Others, like steward Philip Ong, 61, worried that the higher tax could discourage transit travellers from coming through Singapore.

With the hike that will help to partly fund the development of Changi East, including the gigantic Terminal 5, passengers departing from Changi Airport will pay a total of $47.30, up from $34 now. For transit passengers, the total fee will increase from $6 to $9.

Some travellers, however, had no issue with the new fees. Risk manager Kim Thomson, 42, who flies from Perth to Singapore for work regularly, said his company would continue to absorb the costs. 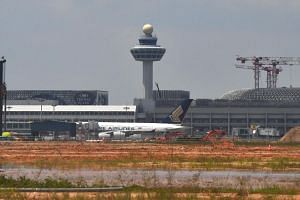 Another traveller, German office worker Claudia W., 52, said the higher tax would not deter her from exploring Singapore. She had spent €4,000 (S$6,500) on a two week luxury cruise around South-east Asia.

Analysts noted, though, that as the higher charges will be included in the airfare, airlines could end up absorbing some of it instead of passing on the entire sum to consumers.

Some airlines are also concerned about the higher charges that will apply to aircraft landing and parking fees that they pay.

Changi Airport Group said yesterday that from July 1, airline fees will rise by 1 per cent every year for the next six years. This means an airline flying an Airbus 380, for example, will pay $6,830 per flight, $64 more than now - in the first year. At the current fee, this difference may increase to around $490 in 2024.

A spokesman for Australian carrier Qantas said that while it supports Changi's expansion plans, "we are disappointed with the introduction of the Airport Development Levy to fund Changi Airport's development of Terminal 5, as this will put pressure on costs and ultimately the fares that passengers pay".

Mr Conrad Clifford, regional vice-president (Asia-Pacific) of Iata, which represents global carriers, said the higher fees could affect the financial viability of airline operations here. "The airline industry is against pre-funding for infrastructure projects. It is unfair to expect passengers and airlines to pay in advance for a facility they may or may not use in the future when the facility is ready," he said.

A version of this article appeared in the print edition of The Straits Times on March 01, 2018, with the headline 'Some travellers put off by higher airport taxes'. Subscribe
Topics:
More
Whatsapp Linkedin FB Messenger Telegram Reddit WeChat Pinterest Print Purchase Article Copy permalink