SINGAPORE - Commuters travelling on one of SMRT's four rail lines next week may notice something a little different about the rail operator's staff.

From next Monday (March 5), some 5,000 SMRT Trains employees - including station staff, train captains, technicians and maintenance crew - will be decked in bright new uniforms.

This is the fourth iteration of the firm's uniform since it began operations in 1987, and is the first revamp since 2010.

"We regularly review the work attire of our staff, making necessary improvements to material or fit to ensure that they continue to meet the needs of staff deployed at stations, aboard trains and across the network," said SMRT chief corporate officer Gerard Koh.

The changes to the uniform - which come after a year of discussions with staff and the National Transport Workers Union - were made for comfort and functionality.

The train drivers' uniforms, for example, no longer include ties and can be worn tucked out.

The new uniforms for SMRT's frontline staff also come in a brighter shade of red compared with the current uniforms, so that commuters can more easily identify these staff members.

Frontline staff can also opt for short sleeves or long sleeves, depending on which is more comfortable for them.

SMRT did not disclose the cost of introducing the revamped uniforms.

The transport operator will also introduce new uniforms for its frontline and support staff in its buses division by the middle of this year. 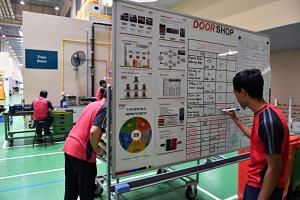 The new attire comes amid a slew of changes at SMRT.

Last Saturday (Feb 24), the rail operator announced that it was raising starting salaries and offering older workers five-year re-employment contracts, as part of a bid to both attract and retain staff.

SMRT plans to hire 2,500 more employees to add to its 11,000-strong headcount over the next three to five years.

On Tuesday (Feb 27), SMRT announced that it had introduced the Japanese concept of kaizen at the Tuas depot and City Hall MRT station in January, with plans to expand its use.

Practiced by firms such as Toyota, kaizen - which means continuous improvement - empowers staff to suggest and make small improvements in their areas of work.