SINGAPORE - SMRT is in talks to sell its taxi business to private-hire operator Grab.

If successful, the deal will see SMRT, the third largest cab operator with a fleet of 3,400 taxis, exiting the business it has been in for 27 years.

The proposal is also for SMRT to have a stake in Grab - a Malaysian start-up that is seen to be a keen rival of Uber - and at least one seat on its board of directors.

The Straits Times understands however, that the proposed deal has hit a bump over the jobs of SMRT Taxis workers.

SMRT, fully owned by the government's Temasek Holdings, wants the buyer to ensure all affected workers retain their jobs. But Grab it seems is not keen to take on more headcount as it has its own staff. 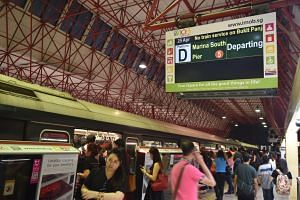 Rail breakdowns: Where does the buck stop?

"Because of this, the sale is nowhere close to a deal," a source familiar with the talks said.

SMRT is reviewing its businesses since Temasek became its sole owner and delisted it last November.

It is understood the government investment giant wants SMRT to double up its focus on the rail business, with a view to make the MRT and LRT lines it operates far more reliable than they have been in recent years.

The taxi sale, if successful, could signal SMRT's disposal of other less substantial businesses with low margins - such as buses.

Its smallish footprint in the bus sector grew even smaller when it lost the Bulim and Selatar route packages to Tower Transit and SBS Transit respectively.

SMRT had also wanted to start a mobility business based on autonomous road-going pods. But that too, has been shelved because of Temasek's focus to get the rail business fully back on track.

Grab, which has been around since 2012, has more than 780,000 drivers across South-east Asia. To date, Grab is available in seven South-east Asian countries: Indonesia, the Philippines, Malaysia, Vietnam, Thailand, Singapore and most recently, Myanmar.