SINGAPORE - Losses are mounting for rail operator SMRT Trains, on the back of higher operating expenses.

Spending on repairs and maintenance accounted for about 71 per cent of rail-fare revenue, up from just 45 per cent three years ago.

This means that for every $1 collected, 71 cents went to maintenance-related expenditure.

The way things are going, commuters can expect fares to eventually increase, experts have said.

Transport Minister Khaw Boon Wan said in Parliament on July 8 that higher fares will be needed in the face of rising subsidies for public transport. 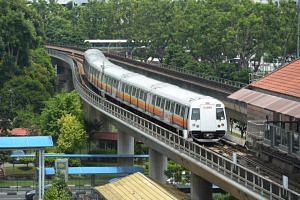 He noted that rail operators were in the red, having increased expenditures in multi-year efforts to raise rail reliability.

Mr Khaw pointed out that the Government subsidises more than 30 per cent of public transport operations, and expects to spend $4.5 billion on operating subsidies over the next five years.

This is on top of another $25 billion to be spent on building new lines.

"With mature rail systems, the only way your revenue really changes is if fare levels change," he said.

"When you have a system where maintenance costs are high because we need to make sure that the system is reliable... and revenue doesn't change, it should be no surprise that your losses go up," he added.

He also noted that unlike airlines, for example, that can add flights to boost passenger numbers, train operators are not able to easily increase ridership significantly to raise revenues over time.

"I think we need to ask ourselves what we actually want out of our transport systems and what we are willing to pay for that," Dr Theseira added.

"You can have cheap or you can have good. But to get both at the same time, that's usually not possible."

In publishing its financial results, SMRT said it spent $425 million on rail maintenance-related costs in the last financial year.

The ratio has been increasing steadily over the past four years. In the 2015/2016 financial year, only 45 per cent of fare revenue was spent on maintenance expenditure.

Higher staff costs due to a higher headcount and increased electricity costs also weighed down its latest results, the train operator said.

The firm also announced that it will appoint Mr Tan Chian Khong as a new board director from Thursday.

Mr Tan, who has 35 years of experience in the audit industry, will contribute through his expertise in managing financial and investment risks, SMRT said.