SINGAPORE - The two SMRT maintenance staff killed in an accident on Tuesday morning (March 22) were part of a group of 15 workers moving in single file on a walkway towards an oncoming train.

The investigation will focus on how Singaporeans Nasrulhudin Najumudin, 26, and Muhammad Asyraf Ahmad Buhari, 24, were hit by an oncoming train when there was a clear line of sight and a supervisor in charge.

SMRT chief executive Desmond Kuek said on Tuesday evening: "We are investigating exactly how they got hit by the train. What we know is that they were walking along in a single file, along the side, along the walkway, they (the deceased) were the second and third men in line, the supervisor was in front of them.

"Exactly how they got onto the track or got close enough to the oncoming train that was moving in the direction opposite to them is the issue we are trying to establish with the witnesses, that we are trying to get a detailed account of." The train was being driven in automatic mode and was travelling at 60kmh coming into Pasir Ris MRT station when it hit the two men, he said.

About 35 people were on the train. Passengers on two trains had to disembark. About 10,000 to 15,000 people were affected by the accident, which affected train services on the East-West Line between Tanah Merah and Pasir Ris stations for more than two hours.

SMRT accident: Permission had been granted to go down to the track

Asked why the group was doing maintenance work while trains were operating, Mr Kuek said: "This is standard. Whenever there is a track fault, regardless if it is a revenue service or during engineering hours, we have to investigate." Staff walk on the walkways beside the tracks a few times a month to carry out maintenance during service hours. It is a routine activity, Mr Kuek added.

SMRT accident: CEO Desmond Kuek said it was a controlled and supervised activity

SMRT's vice-president for corporate information and communications Patrick Nathan had earlier said that the group were investigating a reported alarm from a condition monitoring device for signalling equipment.

The deceased had been undergoing on-the-job training when the accident occurred.

SMRT is extending support to families and all the colleagues who knew the two staff, said Mr Kuek, who added that he is deeply saddened by the incident.

SMRT accident: Counselling being extended to those affected 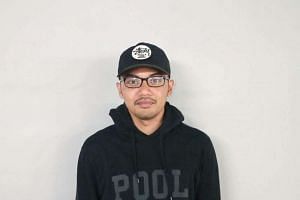 The accident near Pasir Ris MRT station resulted in train services on the East-West Line between Tanah Merah and Pasir Ris stations being suspended for more than two hours.

Mr Nathan said that the accident occurred at around 11.10am near a servicing point.

The two men, who joined SMRT in January this year, had been undergoing on-the-job training at the time of the accident, Mr Nathan said in a later statement.

They were part of a technical team that went down to the track to investigate a reported alarm from a condition monitoring device for signalling equipment. 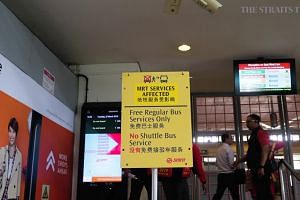 "Permission to access the track was authorised," Mr Nathan added. "Initial findings indicate that before the accident happened, the team was moving in a single file on the walkway beside the track, on the way to the location of the signalling equipment.

"We convey our deepest condolences to their families and are in touch with them to render support and assistance at this very difficult time.

"We are working with the police to conduct a detailed investigation into this accident. SMRT is reviewing all safety procedures in particular those that involve track access. "