SINGAPORE - Residents in Singapore are highly satisfied with the public transport system, which is among the best in the world, based on a report by consulting firm McKinsey.

It recorded a satisfaction level of 86 per cent among those surveyed with the overall public transport situation in Singapore.

"The residents greatly appreciate their transport system and how it has evolved over the last (few) years - they are the most satisfied on 13 out of 14 aspects analysed," said the report, adding that electronic services such as trip planners are what residents in Singapore enjoy most.

The 24 major cities studied include Shanghai, London, Seoul and New York, and were selected based on size, level of economic development, transportation system characteristics and data availability.

Four of them - Berlin, Hong Kong, Shanghai and Singapore - were chosen as their transportation systems are considered outstanding by external institutions such as the TomTom Traffic Index.

The five metrics used to measure the transportation systems were: availability of transportation, affordability, efficiency, convenience and sustainability. 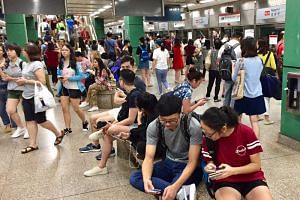 Based on these, Singapore's public transport system was ranked among the world's top 10. It ranked top in the areas of affordability and ticketing.

The report said: "If we were to derive the formula for an ideal transport system, it would be as available as in Paris, as affordable as in Singapore (where public transport is very affordable despite high barriers for car usage), as efficient as in Seoul, as convenient as in Toronto, and as safe and sustainable as in Hong Kong."

It pointed out the fare review and new measures introduced in Singapore in 2013 as a major step towards affordability.

The measures included a 15 per cent discount on adult fares for low-wage workers, free travel for children and seven other concessions - benefiting more than a million passengers, the report said.

It also noted the convenience and flexibility of the ticketing system as another "outstanding feature", and made reference to the ez-link card.

The study surveyed 400 people in each of the 24 cities, with respondents matched to the age-gender ratio of the cities. It asked them how satisfied they were with their transportation system right now, and with the changes they have seen in the past three to five years.

In Hong Kong, 83 per cent of residents surveyed were satisfied with the overall public transport situation.

The report noted that the system has one of the best public transport coverage ranges in the world, with 75 per cent of the population and 94 per cent of workplaces being within 1km of a metro station.

The city’s ticketing system, the Octopus chip card, also ranked No. 1 alongside Singapore’s ez-link card, and it was highlighted that the Octopus card is used by 99 per cent of residents not just for payments but also for non-payment uses such as office building access.

Together with Singapore and Paris, Hong Kong’s public transport safety was also commended in the report, with the three cities having much lower rates of public transit fatalities per million people compared with other cities.

Hong Kong’s use of apps in the public transport system was another boon - one of the apps is even able to help the visually impaired use, for example, Google Maps.

Seoul ranked in the top three for its public transport efficiency, with McKinsey saying that “Seoul and Singapore are distinctive in average wait time and share of dedicated lanes”.

The report said of Seoul: “Such progress is driven by the optimisation of bus routes and construction of exclusive median bus lanes that increased bus speeds by an average of 30 per cent.”

It also pointed to an intelligent bus management system that helps buses stay on schedule.

Like Hong Kong, the city was also highlighted for its rail and bus network coverage. The city attained an 84 per cent satisfaction rate for the overall public transport situation, and the report mentioned that residents are able to use transport apps and access Wi-Fi in buses as well as in metro and bus stations.

Beijing was featured for its comfortable transport system, with the report stating that it has one of the most modern transport fleets. It also surpassed Singapore in its rail infrastructure ranking, coming in 10th ahead of Singapore’s 12th.