SINGAPORE - The civil aviation authorities from both Singapore and Malaysia will work together to develop GPS-based instrument approach procedures for Seletar Airport.

These will replace the Instrument Landing System (ILS) procedures, which were withdrawn over the weekend, Singapore's Transport Minister Khaw Boon Wan and his Malaysian counterpart Anthony Loke said on Monday (April 8).

Mr Khaw did not say when the GPS-based procedures would be implemented at Seletar, adding that "both regulators have to sit down and discuss".

The two ministers were speaking to reporters at a press conference at Kuala Lumpur International Airport after their meeting.

Experts told The Straits Times that both the ILS and GPS-based procedures are instrument-based approach procedures, so pilots do not need to rely only on their vision for landing.

This means that planes can land even in bad weather when visibility is low.

With both the ILS and GPS-based procedures, a series of predetermined manoeuvres are flown under the guidance of instrument systems as an aircraft approaches an airport. 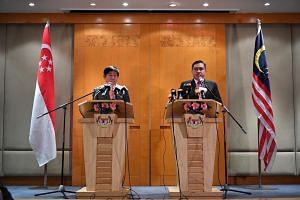 The difference between the two systems is whether the signals are received from a satellite or a ground-based station.

The ILS is ground-based and its main advantage is that the vast majority of commercial aircraft are already equipped to use the technology, which provides pilots with lateral and vertical guidance for landing.

To use satellite-based GPS signals, aircraft operators would typically require some time to outfit the aircraft with the necessary equipment, they said.

Pilots would also have to undergo training to develop the capability and obtain the operational approvals from their regulators.

Mr Loke did not say why Malaysia is ready to accept GPS-based procedures at Seletar but not the ILS procedures.

When asked about the difference between the two, Mr Khaw said: "Some procedures are more conducive in the sense that most aeroplanes will be equipped to handle such instruments, but other aeroplanes and other procedures may not be so well-equipped.

"But since ILS has some difficulties, we think GPS-based is a great possibility."

The key point, he stressed, is that "the instrument procedure enhances safety, and... that is the key objective".