SMRT tweeted at 6.13am that commuters should expect longer journeys on the line due to the "intermittent signalling issue" that was first reported on Monday.

About an hour and a half later, at 7.49am, it cautioned commuters to expect "longer dwell times" as trains waited to pull out of stations.

Commuters have been reporting slow train service, sudden braking, stalled trains, crowded station platforms and poor communication since Monday morning, even as SMRT said in a joint statement with the Land Transport Authority on Thursday that it was "working round the clock" to fix the problem.

[CCL] Due to intermittent signalling issue, please cater for additional travel time on the CCL today.

[CCL] Due to intermittent signalling issues, train may have longer dwell times at stations. Pls cater for longer travel time.

The commuters to whom The Straits Times spoke on Friday said that they have seen an improvement in how the problem is handled since its onset, but their journeys have still been marred.

Secondary school student Marcus Liow, 16, usually takes the train from Cashew to Bishan to get to school, although Friday is a school holiday because of Teachers' Day.

"On one of the days, I think it was Tuesday, the arrival time for the train was not even stated on the board. I was not really irritated but it was a bit warm cause the trains were also more crowded."

Ms Sophia Quek, an undergraduate at the National University of Singapore (NUS), was waiting for the train at Botanic Gardens station around 9.20am.

The station has been the scene of large crowds and frustrated commuters all week, but the frenzy appeared to have died down by the time of her commute on Friday.

"It seems better today. Usually there would be more people at this station, but it is pretty empty now," said Ms Quek, 20.

She said that it normally took her about 10 minutes to get to campus, but her journey has been 10 to 15 minutes longer since the train delays began on Monday.

Ms Quek said that she felt annoyed by the disruption "because it makes me late for school".

The repeated delays have already forced commuters to make changes to their schedule.

"I will leave 15 minutes earlier for important meetings from now on if this delay continues," said NUS graduate student Peng Yi Tian, 27.

Ms Peng suffered a major setback to her Wednesday commute, when her train was stuck at one-north station for 15 minutes and then stalled between one-north and Kent Ridge for another 15 minutes.

She said that she felt that SMRT could have been more forthcoming about its train service woes.

"If they had informed us, then I'll try to make changes to my trip - for example, by taking a bus to school instead,"  Ms Peng said. 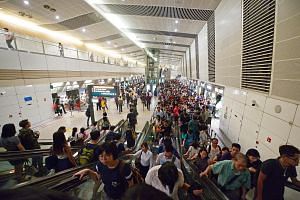 More details of the glitch have emerged over the course of the week.

According to SMRT, the train service delays cropped up because the trains are intermittently losing their signalling communication with the tracks.

Emergency braking kicks in when the signal is lost.

Drivers have had to be deployed on Circle Line trains, even though the system was designed to be driverless.

Ok lah. There is a slight delay of ard 5 to 10 min om the circle line - still acceptable. At least the train is moving.

Ok circle line. I am getting real tired of your stuff. Delays are one thing, but lying abt where the train terminates? Why you trolling us?