Plastic is out and paper straws and reusable cups are in for Singapore Airlines (SIA) as it seeks to shift to more sustainable practices, both in and outside the aircraft.

In a push to go green, SIA has completely swopped out single-use plastics, for both the swizzle stick, or drink stirrer, and straws, replacing them with bamboo and paper substitutes, respectively.

The paper cups that pilots traditionally get their drinks in have also been switched to reusable ones to reduce wastage.

The moves are just one part of the national carrier's push to increase sustainability across its operations and lower its carbon footprint against a backdrop of worsening and unpredictable climate change.

Even the in-flight catering gets a rethink in the form of the "farm-to-plane" concept. Food is locally sourced, prepared and delivered to the plane at whatever destination it is in, reducing the need for transportation of food to the aircraft from elsewhere.

To save on utilities, some 18 per cent of electricity for SIA Group's head office and training centres will be generated by solar panels, while rainwater will make up 12 per cent of water consumption.

The company's eco-digester also means food waste can be disposed of on site, doing away with the need for it to be transported elsewhere for disposal.

Unveiling the sustainability initiatives at the company's results briefing yesterday, SIA chief executive Goh Choon Phong noted that sustainability "isn't something we have previously presented, at least not in this comprehensive manner".

Emissions make up the bulk of an airline's carbon footprint, and buying new, more fuel-efficient aircraft is the most immediate and effective way to reduce those emissions, said Mr Goh.

How eco-friendly is a reusable straw?

According to SIA Group's data, replacing ageing planes like the Airbus A330-300 with newer aircraft like the Boeing 787-10 Dreamliner boosts fuel productivity by 26 per cent, which rises to 29 per cent for long-haul operations. "There is no other more effective way that you could reduce your carbon emissions," Mr Goh said.

Flying more fuel-efficient aircraft also dovetails with SIA Group's fleet renewal strategy. With planes that are six years and two months old on average, SIA has one of the youngest fleets in the world.

An increasing proportion of SIA Group's planes is taken up by the fuel-efficient Boeing 787 and Airbus A-350 jets. 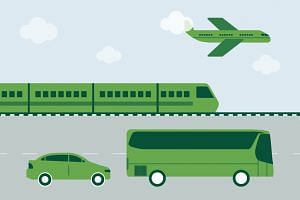 The carrier said it has saved 56 million kg of fuel since the 2015/16 financial year from efficient operational measures and saved 320 tonnes of carbon dioxide emissions by fuelling 12 San Francisco flights with biofuel, equivalent to planting 680 trees.

Mr Goh acknowledged that these initiatives, especially the buying of newer aircraft, call for an increase in expenditure, but said they are necessary. "It is the right thing to do," he said.

On Tuesday, SIA Group posted a first-half profit of $205.6 million, up 5.1 per cent from the year before, buoyed by increased passenger flown revenue.