SINGAPORE - Qatar Airways has been dethroned by Singapore Airlines (SIA) as the world's best airline, following a global survey of more than 20 million travellers.

The last time SIA took home the gold was in 2008 and last year, it came in second in the ranking done by London-based research firm Skytrax.

The awards, which were presented on Tuesday evening (July 17) in London, are based on surveys of travellers who rated more than 335 airlines between August 2017 and May 2018.

Accepting the trophy on behalf of SIA, its chief executive Goh Choon Phong said: "I dedicate it to the 26,000 SIA group employees who focus every day on delivering the world's best travel experience to our customers."

He noted that the recognition is based on direct feedback from customers who have more airlines to choose from in the highly competitive global environment.

"This will further motivate us to improve upon the three main pillars of our brand promise - product leadership, service excellence and network connectivity - to ensure we retain our competitive advantage, and continue to meet and exceed customer expectations." 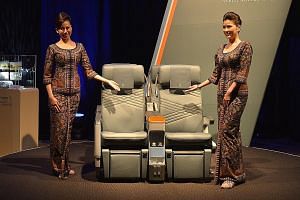 Skytrax chief executive Edward Plaisted said: "A key 'wow' factor for customers is consistency and this proved to a real asset for Singapore Airlines who scored highly across both product and service."

The Skytrax win comes about three months after SIA received a similar honour in the TripAdvisor Travellers' Choice Awards for Airlines 2018.

Award winners were selected based on reviews by global travellers focusing on outstanding service, quality and value.

Amid challenges that have put pressure on yields and profits, SIA has stressed repeatedly that it will continue to invest in new products and services to enhance the customer experience, even as it pushes for efficient operations.

To do this, the airline has embarked on a three-year transformation plan which was launched just over a year ago.

Among other initiatives, SIA is tapping digital technology in various areas - from customer service, company operations and processes, to aircraft maintenance and repair.

To encourage more ideas and innovation, the airline is also asking staff for suggestions on how to improve current processes and procedures across the business.