SINGAPORE - Singapore Airlines (SIA) has released a statement on Thursday (Dec 5) apologising for a flight delay on Nov 29 which saw passengers travelling to New Delhi departing almost 17 hours after the scheduled time.

The airlines said the flight was initially delayed due to bad weather here. But shortly after it left the gate at 6.05pm, the flight crew were alerted to a technical issue with the aircraft's braking system and had to return to the gate due to safety reasons.

"Engineers inspected the aircraft, replaced two components, and ran tests which did not result in any fault indications. Passengers were then invited to re-board the aircraft," said the airline on Thursday.

But at 11.30pm, as the aircraft left the gate, the fault indicate display came up again and the crew had to return to the gate.

The airline said a decision was made at 1.17am to use another aircraft, with the departure time scheduled for 7.30am on Nov 30.

"After SQ406 left the gate for the third time on Nov 30, some passengers told the crew that they were unwell and wanted to disembark. The aircraft had to return to gate once again to allow these passengers and their families to leave, and to remove their baggage," said SIA.

The airline said the families were also provided assistance by its ground staff. The flight eventually took off at 9.23am and landed in New Delhi just after noon (local time) the same day.

Responding to queries from The Straits Times, SIA said that during the delays, passengers were provided with meal vouchers and refreshments such as sandwiches, muffins, fruits and drinks.

But several passengers were miffed over the delays and claimed that ground staff were unhelpful. Some of the complaints were posted on the airline's Facebook page, but they have since been removed.

Facebook user Deep Roy demanded a full refund and said that the delays caused him to miss his child's award ceremony. 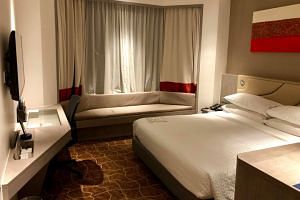 He wrote on the airline's social media page: "The ground staff executives kept feeding us one lie after another and did not show any concern for the problems we were facing!"

When asked about compensation affected passengers had demanded for missed transits and other bookings, SIA said that it was "in touch with our passengers to provide assistance".

"SIA will review the events that took place over the course of this delay, and apply the lessons learnt to improve the service to our customers," said the airline.