Bike-sharing firms have welcomed the new measures aimed at curbing indiscriminate parking, though some raised concerns about how their business will be affected.

The Land Transport Authority (LTA) announced yesterday that it will begin rolling out a QR code parking system for shared bikes.

Users will have to locate a parking zone, park and lock the bicycle in it, and scan a QR code installed at the zone.

Chinese firms Mobike and ofo said they would work with the LTA on implementing the new measures. Mobike country manager Sharon Meng added that the firm did not expect any major changes in its operations as a result.

But SG Bike said the new measures would require the firm to make changes to its app and increase its operating costs.

"However, SG Bike will not be passing any cost to users, and we have no plans to increase any fares or usage charges for our users," said Mr Benjamin Oh, the firm's marketing director.

"We certainly hope that this inconvenience and increase in travel time can be reduced with LTA increasing the amount of parking areas," he said.

Accountant Mandy Yam was concerned that the new regulations could put users off from renting the two-wheelers altogether.

"I cycle from home to Tampines MRT station to get to work daily. I may switch to buying my own bicycle to avoid the risk of paying the fine if I don't scan the QR code properly, or the risk of getting banned for a year (for repeat offenders)," said the 49-year-old.

Town councils said the new regulations, as well as the ongoing expansion of bike-parking spaces, were welcome measures.

Mr Ang Hin Kee, who chairs the Ang Mo Kio Town Council, said the addition of more parking spaces has helped to make the situation more orderly, adding that there has been greater awareness among residents over where to park. 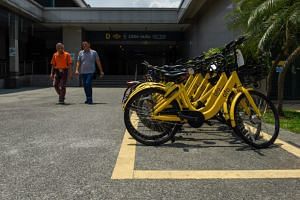 LTA to launch QR code for bike parking system; errant users to be charged $5 or even banned

But Jurong-Clementi Town Council chairman Ang Wei Neng said indiscriminately parked bicycles were still an issue in his area, though the implementation of QR code scanning was a step in the right direction.

"LTA and bike operators have to collaborate to improve the customer's experience to add, adjust and adapt the bicycle-parking areas to the needs of the residents," he added.

National University of Singapore transport researcher Lee Der-Horng was concerned the new measures could be subject to abuse.

"It is an extreme situation, but if the yellow box is full, can I scan the QR code and then put my bike on top of the other bikes? Would that also be parking within the designated area?" he asked.