SINGAPORE - Transport operator SBS Transit (SBST) posted a 23.3 per cent increase in earnings to $20.7 million for the first quarter ended March 31 as better margins from bus contracts continued to flow in.

SBST's profit margin before interest, tax and depreciation improved to 14.8 per cent, up from 13.6 per cent in the previous corresponding quarter.

The ComfortDelGro-owned company on Monday (May 13) attributed its results mainly to "higher fees earned with higher operated mileage from bus services, and higher ridership and average fare from rail services".

The company's non-transit businesses also did better, mainly because of higher advertising revenue. 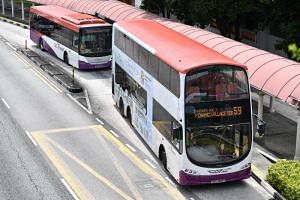 It had a net cash outflow of $26.6 million for the quarter, mainly from the repayment of borrowings, funding operating activities, the purchase of vehicles, premises and equipment, and the repayment of lease liabilities, partially offset by the new loans raised.

As at March 31, the group had cash and bank balances of $6.1 million. After accounting for the borrowings of $94.5 million, it had a net debt position of $88.4 million.

Looking ahead, its directors expect transit revenue to continue to grow, with full-year contribution from the Seletar and Bukit Merah government bus contracts.

They expect the rail business to grow on the back of rising ridership, as well as from a 4.3 per cent fare rise that came into effect on Dec 29, 2018.

But they said this will be offset by higher operating and maintenance costs as the North East MRT line and Sengkang-Punggol LRT lines undergo "mid-life cycle" repairs.

Last week, sister company Vicom - a vehicle inspection outfit also owned by ComfortDelGro - reported a 4.7 per cent rise in first-quarter earnings to $7.5 million. This was on the back of a 4.1 per cent improvement in revenue to $25.5 million.