SINGAPORE - A bus driver who reversed into a woman's car in Thomson Road will be taken to task by SBS Transit.

In response to queries, Ms Tammy Tan, the operator's senior vice-president of corporate communication, said it is in touch with the car's driver and would like to apologise for the "distress and inconvenience" caused.

"We do not condone unsafe driving behaviour by our staff and in this case, will be taking disciplinary action against the bus captain concerned," she said on Saturday (May 18).

On Thursday, Facebook user Clement Goh had posted footage of the bus reversing into the car.

He claimed that the bus had made a wrong turn, reversed into his wife's car and then driven off.

"There were cars behind and cannot reverse. Not sure why the bus captain is not familiar with his route. How to claim SBS for repair?" he added in the post accompanying the video.

In the clip, the bus with service number 5 can be seen backing closer to the camera, taken from the perspective of the driver.

Continuous honking of several car horns can be heard, but are promptly ignored by the bus which continues to reverse into the vehicle until both collide.

A woman, presumably the driver, can later be heard exclaiming loudly: "What is this?" 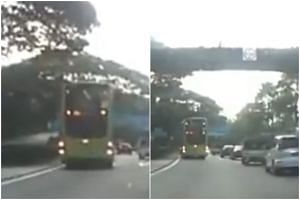 On May 25, Mr Goh again took to Facebook, this time posting a photo of a letter which he claimed was from SBS Transit.

In the letter, the firm said the incident was not reported by its bus driver and it could not comment on liability, and added it was not obliged to do so until a formal claim was lodged.

Ms Tan confirmed that it had sent the letter to the car’s owner concerning repair claims.

“While the Bus Captain did not report the incident to us, we were aware of it when Ms Cheng wrote in and we have investigated the matter,” she said in a reply to ST.
She added that action has been taken against the errant bus driver.

“We are in communication with Ms Cheng and will be assisting her with regards to the repair of her vehicle,” she said.

Stomp reported that the driver, which it named as Mrs Goh, said the incident left her traumatised and helpless.

She told the citizen journalism site that she called SBS Transit's hotline almost immediately after the incident, at around 8.10pm, but as it was after office hours she could submit only an online feedback form.

In a similar incident last June, SBS Transit suspended one of its drivers after he reversed his vehicle on the Ayer Rajah Expressway when he missed an exit.