SINGAPORE - After he was diagnosed with glaucoma in 2004, Mr Lawrence Tan imagined it would be a challenge to continue taking the bus.

He was growing older and suffering from a gradual loss of vision in both eyes.

But the 66-year-old, who uses a white cane because he is now blind in the left eye and has only 20 per cent vision in the right, said bus captains and other passengers have been helpful.

Mr Tan, who acts as an inclusion ambassador for the Disabled People's Association, recalled a recent experience where he was alone at a bus stop in River Valley: "The bus door opened and the driver said 'Uncle, Bus 54'."

It was the bus he needed to take to the Thomson area. Mr Tan said the bus captain then helped him up the bus.

"I was impressed by his attitude. He even guided me to a seat and asked me where I wanted to go."

To promote inclusiveness on public transport, SBS Transit on Friday (May 17) launched a 10-day exhibition at the Sengkang Bus Interchange as part of CARES Kindness Month, an annual event now into its fourth iteration.

Mr Tan was there to describe his personal experience.

SBS Transit said over the past three years, students have been giving bus captains and other staff thank-you notes to show their appreciation.

But the transport provider wanted to take the experience of good service further this year.

It roped in the Disabled People's Association for a chat session, and the Singapore Association of the Visually Handicapped, Association For Persons with Special Needs (APSN) and Guide Dogs Singapore to help educate and demonstrate to commuters how travelling can be made more pleasant for persons with disabilities.

Ms Samantha Lim, who works as a bakery instructor at the APSN, told The Straits Times that some of her students have found it tough on buses and trains, especially during a meltdown. 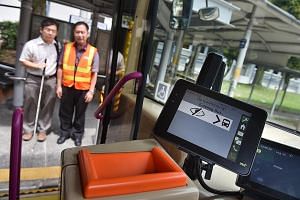 New app for commuters with special needs being tested

"For them to cope with a meltdown, they create noises. But to others, it is a nuisance."

"Some of the students tell me later in class that they were scolded for being loud on the bus. There needs to be a greater understanding of people with special needs," said Ms Lim, 29.

Close to 100 pupils from primary schools, and a kindergarten, attended the event on Friday.

They were given opportunities to understand the challenges that people with disabilities face.

For instance, some of the pupils wore blindfolds while others were taught how to lend a shoulder to someone who is visually impaired.

"I felt like I was going to fall. Next time, I will help by holding their elbow and guiding them to their destination because I now know how hard it is," said the Sengkang Primary School pupil.

He said he also hopes that "people will give up their seats to those who need them".

Over 1,300 children from across 45 kindergartens, primary and secondary schools, as well as tertiary institutions, are expected to visit SBS Transit's bus interchanges and MRT stations nationwide in the month of May to show their appreciation to the front-line service staff.

Mr John Achin, a bus captain, was surprised to receive a card on Friday.

Said the 32-year-old: "It was my first time receiving something like this (thank-you card). I am very happy," said Mr Achin.