SINGAPORE - A heartwarming video that shows a SBS Transit bus driver using an umbrella to shelter his passengers from the rain on Tuesday (Dec 8) night has gone viral.

Mr Terence Jacob, who drives bus service 269, is seen in the clip getting up from his seat at a bus stop and opening an umbrella.

He then stands at the front door, while holding out the umbrella, to prevent commuters alighting and boarding the bus from getting drenched by the heavy downpour.

In response to queries from The Straits Times, Ms Tammy Tan, SBS Transit's senior vice president for corporate communications, said: We are proud to learn of bus captain Terence's heartwarming efforts in going the extra mile to serve our commuters.

"He displays passion at work and this makes the difference."

The 27-second clip has been shared widely on social media since Wednesday (Dec 9). A video post on the Facebook page of Kaki News Network has since garnered more than 210,000 views in less than a day.

It was also uploaded on online group Roads.sg, with many netizens praising the driver for going the extra mile to serve his passengers.

User Jason Goh wrote: "This is the difference between being passionate about his job and just getting the job done."

Another user, Sam Lau, said: "Love it! This is what I call service culture - better than taking a cab." 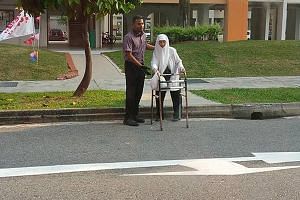 In August, another SBS Transit driver was commended after he waited for a pregnant passenger at a bus stop.

Mr Mohamad Farif Shahbudin, 27, was also spotted getting down from his bus to help a frail old woman cross a busy street two bus stops later.