Most cyclists agree that wearing a helmet is a safer way to ride - but some argue that making the headgear mandatory could deter people from ditching their cars and pedalling to work instead.

The Active Mobility Advisory Panel released a list of recommendations for the Government yesterday on how cyclists and users of personal mobility devices (PMDs) should behave on footpaths and in crowded areas.

One of these included the compulsory use of helmets when cyclists are travelling on roads.

But some cyclists say this could discourage certain groups of people from taking up cycling as a mode of transport, such as the elderly or bike-sharing users, therefore going against Singapore's goal of becoming a car-lite society.

Mr Woon Tai Woon, co-founder of cycling group Love Cycling SG, said these groups of cyclists usually ride on pavements, but sometimes have to use roads due to infrastructure constraints. "In this scenario, where does this leave them?" he said.

While he acknowledged that the intentions behind the recommendation are good, he believes the proposal "complicates matters". "We are trying to advocate cycling for everyone. I think a safety helmet is a good thing, but I don't think it should be mandatory. Surely there are other ways to make cycling safer," added Mr Woon, 44, who gave up driving two years ago.

Mr Woon also noted that in countries such as Australia, a mandatory helmet law has discouraged bicycle use. Protests were held across Australia in March to oppose the compulsory wearing of helmets, with organisers saying the law has become a barrier to bicycle use.

Active Mobility Advisory Panel member Han Jok Kwang told The Straits Times that the proposed rule is not meant to discourage people from taking up cycling but to encourage safety. 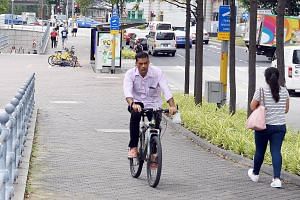 Wear a helmet - it saved my life in three crashes

"When you're on the road, you're dealing with faster and bigger vehicles. You are not in control of the road condition," said Mr Han, 64, who is a member of the National Cycling Plan Steering Committee.

He added that the panel does not expect the proposed helmet rule to affect bike-share users significantly, as shared bicycles are typically used on footpaths.

Other cyclists backed the helmet proposal.

Bicycle shop Treknology3's manager Azhar Abdullah said: "If it is comfortable and lightweight, it can become second nature. If motorcyclists are required to wear helmets on the road, it's only logical that cyclists should."

Avid cyclist Zac Pow said it is "ridiculous" for cyclists not to wear helmets on the road. "Wearing a helmet is the minimum," said the 30-year-old sales engineer.

"I have many friends whose helmets saved their lives, and they have cracked helmets to tell the story," he added.

A version of this article appeared in the print edition of The Straits Times on August 25, 2018, with the headline 'Safer to wear helmets but some cyclists against making it a rule'. Subscribe
Topics:
More
Whatsapp Linkedin FB Messenger Telegram Reddit WeChat Pinterest Print Purchase Article Copy permalink