SINGAPORE - A robot traffic cop has been spotted at Changi Airport.

In a video obtained by The Straits Times, an orange and black robot about 1m tall is seen with the words "Traffic Enforcement in Progress" flashing.

It stops, points its camera at a car that is waiting at an unauthorised area and flashes the sign "No Parking".

The robot, which belongs to Certis which provides security services at Changi Airport, is currently on trial.

Its job is to conduct patrols but it does not issue summonses.

A Certis spokesman said: “As part of our ongoing efforts to reimagine new concepts in advanced security operations, Certis has been conducting trials at Changi Airport in the past two weeks."

The robot is fully autonomous, and encourages smooth traffic flow, added the spokesman.

If feasible, such robots will take some of the load off Certis officers who can then be deployed to do other duties. 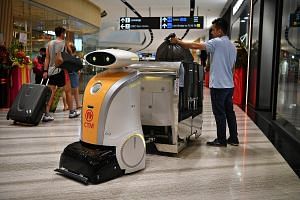 At the Certis Integrated Operations Centre at Terminal 2, for example, a network of thousands of cameras helps staff keep a 24/7 watch on the passenger terminals, airport perimeter and Airport Boulevard.

Even as technology continues to develop and robots perform some security functions, “the human touch will always be required”, Mr Tan told ST then.

“Technology will help us do things better, faster and more effectively, but it will never replace humans 100 per cent,” he said.

The robot trial is the latest initiative at Changi Airport that has been turning to technology to operate more efficiently and reduce the reliance on manpower.

Across all operations, from passenger check-in to baggage and cargo handling, as well as cleaning services, new technology and systems have been rolled out in the last few years.

For example, more than seven in 10 departing passengers now have access to Changi’s Fast and Seamless Travel initiatives.

This allows them to opt for self-service check-in, bag tagging and boarding.