SINGAPORE - About a quarter of SMRT's five-year escalator refurbishment project across the North-South and East-West Lines has been completed, said the train service provider in a statement on Wednesday (May 15).

The upgrading works, which started in August 2016, is the first major refurbishment of escalators since the MRT began operations in 1987.

The project involving 233 escalators across 42 stations was awarded to Otis Singapore, and to date, 54 of the escalators have been fully refurbished.

Currently, work is being done on 21 escalators.

Most of the refurbishment works are to be completed by the end of 2021.

The works involve removing, installing and replacing more than 1,000 parts and major components.

"Our escalators in service have an availability rate of more than 99.5 per cent, and the upgrading works are undertaken to ensure that escalators are safe for commuters," said the SMRT statement.

At any one time, work will be carried out on one escalator per station, except for the bigger stations with more escalators, said SMRT building and facilities vice-president Siu Yow Wee. 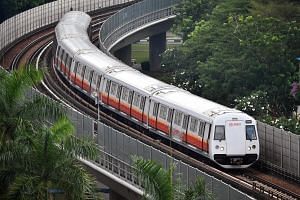 This is to minimise inconvenience to commuters during the upgrade, he added.

Progress was slow in the first year, as Otis had to develop a customised refurbishment plan, said SMRT.

New commuter-friendly features, such as dual-speed and directional traffic lights, were implemented and tested, along with additional safety enhancement features, such as handrail speed monitoring and skirt deflectors.

"After the initial planning period of about eight months, we have gained in-depth understanding of the requirements of the refurbishment plan and the resources required," said an Otis spokesman.

Based on the experience from previous years, about four months are needed to complete the upgrading works of one escalator for straightforward cases.

Some refurbishment works may take longer than four months because additional issues are discovered only after the escalators are completely dismantled.

In these cases, more extensive works are needed, said SMRT.

As a result of these unforeseen delays, some of the refurbishment works may be completed beyond 2021.