SINGAPORE - The Traffic Police have confiscated two high-powered sports cars used in an illegal race - the first forfeiture of its kind here.

A Lamborghini Murcielago SV and a Nissan GT-R were involved in a race in Seletar Link in 2015. The cars - around $1.6 million and $600,000 respectively when new - will soon be auctioned off, and the money will go to state coffers.

While forfeiture of vehicles used in illegal races is mandatory under the law, actual confiscation is rare because there is a strict definition of racing. For instance, there has to be a defined start and end point.

Hence, there were only five cases of illegal racing from 2014 to September this year. Others were classified under "dangerous driving", of which there were 232 cases in the same period.

Right now, illegal racing cases pertaining to four others - two BMWs and two Volkswagens - are pending, the police told The Straits Times on Friday (Nov 17) during a visit to its vehicle pound off Airport Road.

The BMWs were found racing in Lim Chu Kang Road in July (clocking up to 177kmh), while the VWs were caught doing so in the same road last December.

"We will press for forfeitures," said Commander of Traffic Police Sam Tee. "Let this be a warning to errant motorists who wilfully disregard the safety of other road users.

"There must be a sense of law and order on the road."

Mr Tee said culprits are usually caught during regular enforcement operations. "We are also supported by the community. Many people have provided us with information and video footage." 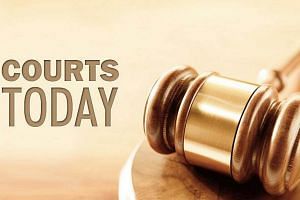 Lamborghini worth $630,000 to be forfeited to the state after it was used in illegal race

Both groups of offenders also face suspension of their driving licences.

The law does not provide for forfeiture for dangerous driving offences, but the vehicles are often seized and kept in the Traffic Police pound during the course of investigation and prosecution. This can last two years or more.

The Traffic Police said there are more than 800 vehicles at its pound, including buses, heavy trucks, several taxis, motorcycles and even bicycles.

All the drivers caught for illegal racing or dangerous driving in the past three years have been men in their 20s and 30s. Most were caught in Lim Chu Kang Road and Seletar Link.

Automobile Association of Singapore chief executive Lee Wai Mun said there may be a case for reviewing the law to ensure it is effective and relevant.

"Whether it is illegal racing or dangerous driving, the consequences for the public are the same," Mr Lee said.

Last December, then Senior Minister of State for Home Affairs Desmond Lee said penalties for road traffic offences will be reviewed and stiffened to clamp down on irresponsible motorists. He said the Government "will seek to increase the penalties for offences that result in death or hurt to others".