Lanes to be set up in Woodlands, Toa Payoh, Choa Chu Kang, Geylang and Queenstown

More than 40km of cycling paths will be built in five towns over the next five years as part of efforts to expand the cycling infrastructure here, the Land Transport Authority (LTA) announced yesterday.

Tenders to build the paths - to be located in Woodlands, Toa Payoh, Choa Chu Kang, Geylang and Queenstown - will be called later in the year, the authority added.

The 7km of cycling paths in Toa Payoh will be a first for the town, Singapore's second-oldest housing estate and the first built by HDB.

"Existing infrastructure such as bus stops will be redesigned to better accommodate cyclists and pedestrians," the LTA said.

Bishan-Toa Payoh GRC MP Saktiandi Supaat welcomed the move, noting that there are a number of cycling groups among his residents.

"It would be good if the paths can connect to the park connector network," he said, referring to the ambitious network of walking and cycling paths connecting Singapore's parks and green spaces.

Meanwhile, Woodlands will see 20km added to its current 4km of cycling paths and more than 8km of park connectors.

This will make the cycling network for the northern town among the largest here, the LTA said.

The new paths will also connect to key amenities as well as four MRT stations - Marsiling, Woodlands and Admiralty MRT stations on the North-South Line, and the Woodlands South station on the Thomson-East Coast Line which will open by the end of this year.

An additional 12km of cycling paths will be a major boost to the existing half-kilometre stretch in Choa Chu Kang. 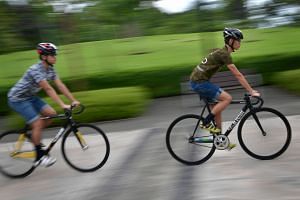 Cyclists cheer expansion of paths but call for better safety

The LTA said it is also studying the feasibility of widening an existing footpath along the Choa Chu Kang West Flyover to a 2.5m-wide shared path. "This will improve cycling connectivity between Choa Chu Kang town and Yew Tee town, which are currently separated by the Kranji Expressway," said an LTA spokesman.

In addition, a 150m cycling path will be built in Geylang and 2.3km added to Queenstown which will connect to existing park connectors in these areas and allow residents to cycle directly to the city centre.

The proposed paths will add to the current 120km of cycling paths and 300km of park connectors available islandwide.

By 2030, the authorities expect to have 700km of cycling paths across the island, with a "comprehensive cycling network" in all 26 Housing Board towns.

Separately, the LTA also announced that it will call a design consultancy tender later this year to study how to enhance the walking environment within the Jurong Lake District (JLD) and improve its active mobility connectivity to neighbouring towns.

"This will complement the existing 15km cycling path network in the JLD and upcoming cycling paths in Taman Jurong that are expected to be completed in 2020," said the LTA .

It noted that this would enhance efforts to make the area - earmarked as the Republic's second Central Business District - a "truly car-lite district".

The JLD was one of five areas identified by the LTA as car-lite precincts last November.

A version of this article appeared in the print edition of The Straits Times on March 27, 2019, with the headline 'Over 40km of cycling paths to be built in next five years'. Subscribe
Topics:
More
Whatsapp Linkedin FB Messenger Telegram Reddit WeChat Pinterest Print Purchase Article Copy permalink