It took one sunrise and two nights to get passengers from Singapore to New Jersey on a non-stop flight over the North Pole.

Singapore Airlines (SIA) Flight SQ22 landed at Newark Liberty International Airport at 5.29am (US Eastern time) yesterday, 17 hours and 52 minutes after it took off from Changi Airport on Thursday night.

The flight landed early due to strong air streams.

Qatar Airways previously held the title with its Auckland-Doha flight, which covers a distance of 14,536km in about 17 hours 40 minutes.

SIA may not be able to hang on to the title for too long, though.

Qantas has challenged aircraft manufacturers Airbus and Boeing to build a plane that can fly non-stop from Australia to the United States, a journey of over 20 hours. Ultra-long-haul flights that easily cut about four to six hours of flying time - a big deal, especially for those on work trips - are gaining traction among airlines and their customers.

Analysts said SIA made a sound business move in reinstating non-stop services to the US.

The airline launched a new service to San Francisco in 2016, and revived its Newark and Los Angeles routes. The latter will start on Nov 2.

Ms Corrine Png, chief executive of transport research firm Crucial Perspective, noted that the Americas currently account for 14 per cent of SIA's revenues, down from 20 per cent in 2013.

She said SIA had lost high-yielding business traffic when operating trans-Pacific connecting flights, which opened the airline to a lot more competition. "We expect Singapore Airlines to regain market share, especially in the premium travel market," she added.

Whether ultra-long-haul operations are sustainable will depend to a large extent on fuel prices, analysts said. Aviation expert Shukor Yusof of Endau Analytics said: "The main difference now is SQ has an aircraft that is completely suitable for this task, the A350-900ULR. It is very versatile and fuel efficient." 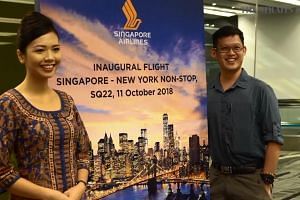 But he warned that higher jet fuel costs of more than US$100 per barrel could negate the ultra-long-range aircraft's advantage.

Prices are currently averaging just below that mark.

The other question is whether there is enough of a premium market to make it work, he added.

SIA's A350-900ULR is configured with 67 seats in business class and 94 in premium economy.

Centre for Aviation analyst Brendan Sobie pointed out that SIA has been offering low initial fares on its US non-stop routes - below $1,500 for a return ticket.

While it is still early days, he said there is a question mark over whether the routes will be profitable for SIA, given the intense competition in the Singapore-US market, rising fuel prices and the large number of premium seats to fill.

Mr Campbell Wilson, SIA's senior vice-president of sales and marketing, said the promotional fares are meant to introduce the new service to the broader community.

"People should look at this as a great opportunity to experience a brand new aircraft, a brand new product, a non-stop service to the other side at a very competitive price," he said.

Passengers on the inaugural flight to Newark gave it two thumbs up.

Dr Lakshmi Manjunath, 36, who travelled with her husband and 14-month-old son in the premium economy cabin, said: "(My son) does not usually take well to flights, but it has been good.

"We got a separate seat for him, so that helped as well. This aircraft feels more spacious, and it has really been a comfortable flight."