SINGAPORE - Bike-sharing firm oBike, which abruptly shut down operations earlier this week, has been given the deadline of July 4 (2018) by the Land Transport Authority (LTA) to remove its bicycles from public spaces.

The shared bicycles, which number at least 14,000, are now all over the island but cannot be hired as oBike stopped operating on Monday (June 25).

The LTA said on Thursday (June 28) that it met oBike representatives on Wednesday (June 27) and instructed oBike to work with its liquidator to collect its bicycles in a week's time, failing which the authority will step in to progressively remove them.

LTA said oBike or its liquidator will then have to pay the relevant towing and storage fees to claim the impounded bicycles.

The LTA and the Consumers Association of Singapore (Case) also said they had "emphasised to oBike the importance of refunding users their deposits which were placed earlier with the company".

Case said it has received more than 770 complaints from consumers asking for oBike to return their deposits - of up to $49 - which were required to use the rental service.

The majority of complaints were lodged in the last four days, after oBike announced it was closing down.

The Chinese-founded firm, when announcing its closure, said it foresaw difficulties in meeting the LTA's new licensing regime for bike-share firms, which is aimed at tackling indiscriminate parking and controlling fleet sizes. 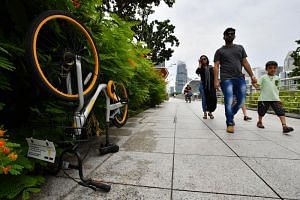 27 complaints against oBike this year: Case

While the licensing scheme will ensure that only responsible bike-share operators are allowed to operate here, it is not intended to address "non-parking issues such as service standards and user deposits", the LTA added.

Members of the public have called for the LTA to take more action against oBike for the unreturned deposits.

LTA said users can choose from different subscription models offered by the bike-share companies, including those which do not require deposits.

"Over-regulation could lead to higher compliance costs for operators which could in turn be passed on to users, and stifle innovation," the authority added.

Meanwhile, Case said that once oBike's liquidation starts, oBike's customers will not be able to sue for the return of their deposits.

They should instead file a Proof of Debt against oBike with the appointed liquidator.