Both patients were discharged on the same day after receiving treatment, said the Land Transport Authority (LTA) in a statement on Sunday (Nov 19).

Giving an update on those who had been warded, it said that the patient at the National University Hospital remains warded for observation, while two at the Ng Teng Fong General Hospital had been discharged.

The passengers were injured after a software glitch in the new signalling system of the East-West Line resulted in a collision between two trains at Joo Koon station on Wednesday.

While the four stations on the extension - Gul Circle, Tuas Crescent, Tuas West Road and Tuas Link - will reopen after the weekend, the authorities will keep the service between Joo Koon and Gul Circle stations suspended for up to a month, with buses to bridge the gap.

LTA confirmed in its statement that train services along the four stations of the Tuas West Extension will resume on Monday (Nov 20).

So westbound passengers headed for Gul Circle, Tuas Crescent, Tuas West Road and Tuas Link MRT Stations will have to alight at Joo Koon MRT Station and catch a free shuttle bus service to the onward station - Gul Circle MRT Station. A similar arrangement is available for the opposite direction, said LTA.

It added that passengers who need to use the shuttle between Joo Koon and Gul Circle MRT Stations will not be charged a new fare when they re-board the MRT train, and that the trip will be treated as a single journey.

Rail operators must inform commuters of delays over 10 minutes

MRT closures and shorter operating hours: What you need to know

Khaw: Firm behind signalling system could have done better 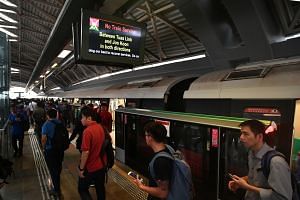 Tuas West stations to reopen only on Monday