SINGAPORE - The Lornie Highway will open fully on April 19, after repeated delays, when the northbound stretch from Adam and Farrer roads towards Thomson is accessible to motorists.

Its southbound stretch towards Farrer Road opened in October 2018.

Previously known as Bukit Brown Road, the project was first announced in 2011 and initially slated for completion by mid-2016.

The new dual four-lane road is meant to cater to traffic growth arising from redevelopment of the Bukit Brown area, with traffic projected to increase by 20 to 30 per cent by 2020.

It is also aimed at easing congestion along Lornie Road and the Pan Island Expressway (PIE), where traffic snarls are a regular occurrence during peak hours.

In a news release on Tuesday (March 19), the Land Transport Authority (LTA) also announced other road changes in the area. 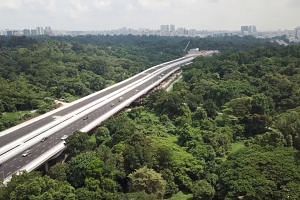 With this direct connection, the temporary road connection from Sime Road and the signalised junction along the southbound Lornie Highway will be removed.

Besides the northbound Lornie Highway, two underpasses will open at 3am on April 19.

The Adam underpass will allow motorists travelling east on the PIE to exit the expressway onto the northbound Lornie Highway towards MacRitchie Viaduct.

Meanwhile, the remaining bound of Sime Underpass will bring traffic from Kheam Hock Road to the northbound Lornie Road.

A new bus stop will be built along the new access road to Sime Road estate with the opening of the northbound Lornie Highway. Five of the seven bus services - 52, 74, 93, 852, 855 - currently plying Lornie Road will shift to the Lornie Highway once the bus stop is ready.

Changes to the bus routes are expected by the third quarter of 2019, said the LTA.

When first announced, the Lornie Highway stirred up strong protests from nature and heritage groups because it cuts across a vast forested area and the Bukit Brown cemetery, where many of Singapore's pioneers were buried. More than 3,000 graves in the area have been exhumed.

The LTA on Tuesday cited the expected increase in traffic flow from end March to early April due to the Qing Ming Festival as the reason why it adopted a phased approach, with the northbound stretch of Lornie Highway opening on April 19.

In the same release, the LTA gave the opening dates of two new slip roads serving the Punggol estate.

A new slip road from the westbound Tampines Expressway (TPE) to Halus Link towards Lorong Halus and Punggol Central will open to traffic at 3am on March 30.

This will give motorists an alternative route to Punggol Central, in addition to existing routes via Punggol Road and Punggol Way. It is also expected to alleviate the evening peak traffic, LTA said.

In addition, a new slip road on the eastbound TPE to Halus Link will open by June 2019, and give motorists an alternative route to Punggol Central.