SINGAPORE - Savings of up to 20 per cent a month are in the offing for commuters when an app, with major transport players behind it, introduces subscription plans in six months' time.

The Zipster app will probably have three to five plans with varying amounts of savings for trips on both public transport and private-hire cars and even shared electric cars, said its developer, start-up mobiltyX, on Monday (Sept 16).

The start-up is backed by transport operator SMRT and Toyota Tsusho, the general trading arm of carmaker Toyota.

Billed as a first of its kind in Asia, Zipster brings on one platform all public transport operators in Singapore as well as major companies such as Grab, Gojek and BlueSG, an electric car-sharing operator.

Senior Minister of State for Trade and Industry Chee Hong Tat, who officially launched it on Monday, said that besides savings, the app would give commuters greater convenience.

Mr Chee noted that apps like Zipster is poised to be the next disruptor in the land transport sector, he added, reiterating a point made last month by Senior Minister of State for Transport Janil Puthucheary.

"By integrating mobility services such as public transport, taxis, and car and bicycle sharing, MaaS offers commuters a more streamlined and personalised experience," said Mr Chee, referring to the concept Mobility as a Service (MaaS). 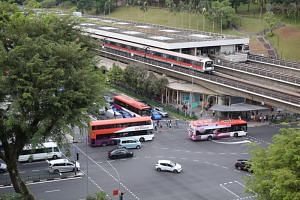 All-in-one transit apps could be next transport disruptor: Janil Puthucheary

"There are also benefits to society as a whole, as such services can further improve the overall efficiency of our transport system."

The trial version of the app has been available for download since April this year.

The current Zipster has fewer functions.

It offers a route planning function similar to that of apps like Google Maps and suggests various transport options and timings for completing a trip.

In addition, it shows the prices of say, taking a trip by bus, MRT or private-hire cars.

For private-hire trips on Grab or Gojek, Zipster will direct the commuter to their respective app.

He also said mobilityX is working with payments giant Mastercard and local firm MatchMove to develop a pilot payment card for its subscription plans.

Mr Lim has plans to expand Zipster in the Asia Pacific region and said a growing demand for alternatives to a car would boost business.

"We are still in the early stages of the revolution. I think in the next five to 10 years, how people consume transport will change dramatically," he added.

At Zipster's launch, Mr Chee said Enterprise Singapore is working with mobilityX to take the app overseas. He urged other businesses to also expand beyond Singapore to seek opportunities.

"There are risks involved when we go overseas, but there are also significant rewards if we succeed," he said.

"(The Government) is prepared to share some of these risks with our fellow Singaporeans and our businesses."