Finnish start-up MaaS Global has teamed up with local transport giant ComfortDelGro to launch an app for commuters to use for travel across all modes: taxi, bus, train, rental car and bicycle.

Although pricing has not been determined, it is expected to offer the most value to high-usage commuters - not unlike the $120 monthly TransitLink card for unlimited train and bus rides.

To be available from the first quarter of next year, the Whim app is marketed as the "Netflix of transport", allowing commuters to have a wide menu of travel choices, with payment schemes to suit consumption patterns.

MaaS Global business expansion specialist Sohail Rashid told The Straits Times that "we will come up with pricing that is acceptable to main users". He said that Whim pricing will take into account that there is a $120 monthly card for unlimited bus and train rides.

ComfortDelGro said yesterday the app "has already revolutionised the way commuting is done in Finland, Belgium, Netherlands and the UK".

Users who have downloaded the Whim app on their phones can type in where they want to go. The app will suggest routes, and if the user chooses one, all fares are paid.

Users who have downloaded the Whim app on their phones can type in where they want to go. The app will suggest routes, and if the user chooses one, all fares are paid. In Britain, for instance, users of the Whim app can choose a £349 (S$630) monthly subscription that gives them unlimited access to taxis, car rentals and public transport.

Mr Rashid said the app will be applicable across all operators, even though the company has tied up with ComfortDelGro to launch it.

When asked about the revenue model for MaaS Global and ComfortDelGro, Mr Rashid said: "For ComfortDelGro, we're offering them the prospect of more rides.

"Our own revenue model will be based on discounts from our partners. For obvious reasons, we cannot disclose what those discounts are."

In a statement, MaaS Global co-founder Kaj Pyyhtia said the firm plans to enter other Asian markets with the "mobility as a service" app. 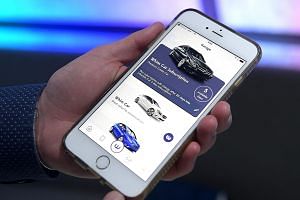 'Netflix of transport' may debut here

MaaS is the acronym for mobility as a service, a new buzz term embraced by cities that are trying to wean themselves off cars.

In March, rail operator SMRT announced that it would launch an app by the year end that will integrate all forms of public transport, shared bicycles, e-scooters and even autonomous vehicles.

The so-called Jalan app is being trialled on the Nanyang Technological University (NTU) campus. It has about 350 followers on Facebook.

According to trial partner NTU, the app has had an average of 5,000 planned trips per week.

A version of this article appeared in the print edition of The Straits Times on October 09, 2018, with the headline ''Netflix of transport' app to be available here next year'. Subscribe
Topics:
More
Whatsapp Linkedin FB Messenger Telegram Reddit WeChat Pinterest Print Purchase Article Copy permalink