SINGAPORE - NCS and MHI Engine System have clinched a deal to build Singapore's next-generation electronic road-pricing (ERP) system, one which will have islandwide coverage and the ability to charge for distance travelled.

The partnership's winning bid of $556 million is less than half of the $1.2 billion submitted by the other qualified bidder: ST Electronics.

Announcing the tender results at a press conference Thursday (Feb 25), Land Transport Authority chief executive Chew Men Leong said the NCS-MHI bid was superior to ST Electronics', and that it "came within our budget".

Asked about the vast difference between the two qualifying bids, Mr Chew said he was confident that the winning team will be able to "execute the project in a commercially-viable way".

The new system replaces the current gantry-based ERP system that has been in place since 1998. It will be rolled out from 2020.

For a start, there will be an 18-month transition period between the old and new system, when motorists will swop their current in-vehicle unit for a sophisticated, smartphone-sized onboard unit. 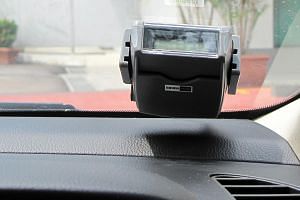 Among other things, this unit will be able to alert drivers of priced roads well in advance (before turn-offs to alternatives), inform them of charges, and provide real-time traffic information. Armed with this information, the LTA said drivers can better decide when to drive, which route to take, or leave the car at home and take public transport instead.

The first onboard unit will be free of charge.

During the transition period, motorists can expect no change to the current charging regimen. After the transition phase, the LTA will look into phasing in distance-charging.

This could mean significantly higher ERP charges for road-users who clock high mileages, such as taxi-drivers, deliverymen and bus operators.

Mr Chew said there was no timeline for the implementation of distance-charging.

But he said other functions of the new system will be available from day one. These include real-time traffic information for every road user, coupon-less streetside parking, and automatic payment for offpeak car owners who drive during peak periods.

This means the system, which uses satellite navigation technology, has islandwide coverage. In places where satellite coverage may be weak - such as in tunnels or under viaducts - signal beacons will be in place.