SINGAPORE - There are plans to extend the testing of the new signalling system on the North-South and East-West Lines (NSEWL) to revenue hours, when passengers are on board, said Transport Minister Khaw Boon Wan on Sunday (March 11).

This means that commuters should expect "glitches and delays", he said in a Facebook post, adding: "I urge commuters to bear with us and thank them for their patience."

Mr Khaw, during the debate on his ministry's spending plans in Parliament last week, had similarly pointed out the need to start testing the new signalling system of the East-West Line (EWL) during passenger service hours.

He noted this as "bad news", but said the "good news" was that the North-South Line (NSL), which has already started running on the upgraded system, "should cross its 150th consecutive day of no disruptions today (March 7)".

In his Facebook post, Mr Khaw also shared photos of his recent visit to train operator SMRT's Operation Centre, where he observed testing of the new communications-based train control signalling system on the entire NSEWL network.

"Testing allows us to calibrate and tune the signalling equipment on each train," Mr Khaw explained. "That is why re-signalling is so complicated and time-consuming."

Mr Khaw noted that as the new signalling system has stabilised on the NSL, and the focus is now on the re-signalling of the EWL.

"Learning from the NSL experience, we are intensifying testing of the system, without passengers. This means doing so during engineering hours," he said. 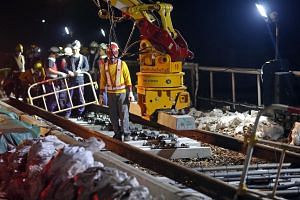 Half of major MRT upgrading to be completed by June

"That is why the #ECLO (Early Closure, Late Opening) is so useful to us," he added, referring to the move since December to shorten operational hours on the entire NSEWL network on weekends to cater more time for renewal and maintenance work.

This includes trials for the new signalling system on stretches of the EWL.

This month (March), stations will open later at 8am and also close at 11pm every weekend this month until April 1.

On Monday(March 12) and Wednesday, during the March school holidays, the EWL stations will also close earlier at 10.30pm.

Trains usually run from 5.30am to about midnight daily.

Mr Khaw noted that the extra engineering hours provide engineering staff with longer blocks of time on the train tracks.