SINGAPORE - Increased fares for some train and bus trips have officially kicked in.

Card fare increases for students and senior citizens have been capped at one cent, and their cash fares remain the same as before.

The rise in fares for lower-wage workers and people with disabilities has also been capped at one cent.

The Public Transport Council announced the changes on Oct 30.

The Straits Times earlier reported that the adjustments will translate to an increase of $78.2 million in fare revenues for public transport operators for 2019. 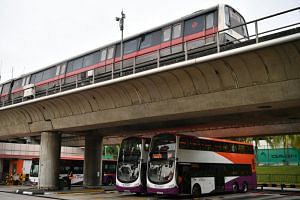 Over 150,000 households apply for vouchers to defray public transport costs, ahead of Dec 29 fare hike

Of that amount, train revenue will rise by $35 million, with SBS Transit seeing a $10.9 million increase and SMRT seeing a $24.1 million hike.

The fare adjustment accounted for a new component called the Network Capacity Factor. This calculates the difference between transport supply and commuter demand.

Renewing oldest MRT lines to cost over $2.5b | THE BIG STORY | The Straits Times

For a summarised table of the new bus and train fares, please see below.