SINGAPORE - The 33-year-old motorcyclist who was involved in a three-way collision with a van and a sports car at the junction of Marina Boulevard and Bayfront Avenue on Oct 6 has died.

He succumbed to his injuries last Sunday (Oct 18), nearly two weeks after being admitted to the Singapore General Hospital.

Police subsequently arrested the 44-year-old van driver on Tuesday, for causing death by a rash act.

The Straits Times understands that he is currently out on bail.

The dramatic accident, which occurred at around 11.40am, was captured on the dashboard camera of tipper truck driver Mr Fahil.

Accident at junction of Marina Boulevard and Bayfront Avenue

It was first uploaded on the Facebook page of road safety interest group Beh Chia Lor, and has garnered more than 120,000 views since. 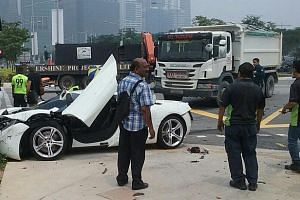 The video shows the van speeding from Bayfront Avenue just as the traffic on Marine Boulevard was moving off on the green light. It collided with the motorcycle and a white sports car - said to be a McLaren MP4-12C - which then crashed into a traffic light at the junction due to the impact.

Mr Fahil, who had stopped his truck at the junction to protect the motorcyclist after he was flung off his ride, said the impact was so great that his helmet flew off.

It was previously reported that the motorcyclist was in stable condition.

The van driver, who suffered minor injuries, was taken to Raffles Hospital, but he was subsequently discharged.