SINGAPORE - More 85,000 e-scooters were registered with the Land Transport Authority (LTA) before the deadline to do so ended on Sunday (June 30).

Of the total, almost 1,000 registrations were recorded on the last day, an LTA statement said on Monday (July 1).

With the passing of the June 30 deadline, it is now illegal for personal mobility device (PMD) users to ride, cause or allow another person to ride an unregistered e-scooter on public paths.

Retailers and other operators are also barred from selling or leasing any non-UL2272 certified PMDs.

Application to register the e-scooters opened on January 2 this year, with the registration scheme part of efforts to deter reckless riding as well as to facilitate enforcement efforts against errant riders.

New PMD owners and those who have yet to register their devices can still do so on the OneMotoring website if their e-scooters are compliant with LTA's device criteria.

Those registering must be at least 16 years old, and will have to declare that their e-scooters do not exceed 20kg in weight and 70cm in maximum width.

The e-scooters' maximum motorised device speed should also be capped at 25kmh. 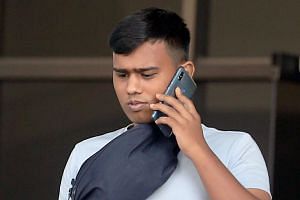 E-scooter owners must register devices by end June; $20 fee waived if they do so before March 31

In its statement on Monday, the LTA said that about 75 per cent of registrants were between the ages of 21 and 50, while 21 per cent were 51 years old and above.

LTA added: "From today, only e-scooters that are compliant with LTA's device criteria, including UL2272 certification, can be registered.

"LTA enforces our Active Mobility rules on a daily basis through our own operations as well as joint ones with other partner agencies. We enforce against all active mobility offences including non-registration of e-scooters, device non-compliance and speeding."

First-time offenders who are found riding an unregistered e-scooter on public paths can be fined up to $2,000 and jailed up to three months.

Retailers and operators found flouting the UL2272 certification rule can be fined up to $5,000 and jailed up to three months for a first offence.

Transport economist Walter Theseira told The Straits Times it would be difficult to gauge the number of e-scooters which remain unregistered or non-compliant with standards in Singapore.

He said: "While the majority of actively used devices should have been registered, it would be hard to assess how far we are from 100 per cent registration, because there were no registration requirements until recently.

"I think there will be some unregistered units and enforcement will have to send a message that this isn't going to be tolerated, to protect the public and legitimate registered users."