SINGAPORE - There have been more than 3,700 offences committed under the Active Mobility Act over the last 12 months, the Land Transport Authority (LTA) said on Friday (May 10).

These offences include reckless riding on paths, speeding, riding of non-compliant devices, and riding of personal mobility devices (PMDs) on roads, the LTA said in a Facebook post.

The Active Mobility Act, which came into effect in May last year, governs the use of bicycles, e-bikes and PMDs on footpaths, shared cycling paths and roads.

These devices must meet certain specifications, like having a top speed of no more than 25kmh and a maximum weight of 20kg.

Under the Act, riding of PMDS on the road is illegal and the devices must adhere to a top speed of 10kmh on footpaths and 25kmh on shared paths.

In its post, the LTA noted that, besides its own daily enforcement operations, it also partners other agencies such as the police and the National Parks Board for joint operations.

One such joint effort, conducted this week at the Pang Sua park connector in Bukit Panjang and Choa Chu Kang, turned up a 35kg e-scooter, noted the authority. 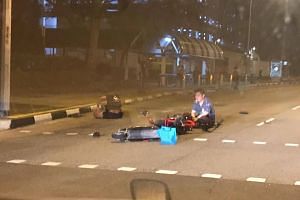 "We'll continue to work closely with our partners to enhance safety on our public paths," said the LTA.

Dr Faishal - who is Senior Parliamentary Secretary for Education and Social and Family Development - noted that the panel had contributed to plans by the LTA and the Urban Redevelopment Authority to improve the Republic's walking and cycling connectivity.

"It is heartening to see that more people are picking up active mobility options and are developing healthier lifestyles as they make their way around the community," he said.