Mobile service on the Circle Line resumed yesterday, with commuters finally able to call, text and access the Internet after a day's suspension.

After the Land Transport Authority's (LTA) announcement last Friday night, the three telcos - Singtel, StarHub and M1 - restarted service between 11am and noon.

Tests were carried out during the shutdown to isolate the cause of the signalling faults that have affected the line since Wednesday morning.

"It is harder to find the source when it is an intermittent interference than one that is always there. With a constant source, it is easier for radar systems to detect.

"The problem is it happened two months ago and then came back, meaning whatever it was is still there." 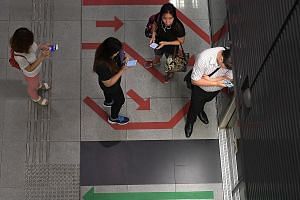 While nothing is being ruled out at this stage, Dr Park said the authorities appear to be zeroing in on signal interference, which "means that an electromagnetic field somewhere is interfering with their signalling system".

He said the interference could come from any number of sources, including the mobile network, or nearby buildings with underground equipment that emanates strong electromagnetic fields.

By suspending the mobile services, Dr Park said the authorities would be able to eliminate the network as the cause, and also declutter the saturation of disruptive frequencies in the air, making it easier to find the source.

In a joint statement in September, the LTA and rail operator SMRT said they were installing "spectrum analysers" to detect the presence of interfering signals.

They also said they were considering various other measures to prevent the problem from resurfacing, including fitting trains with electromagnetic shields and changing the signal frequency of the network.

Circle Line commuter and graphic designer Desmond Yap, 23, said yesterday that he was happy to be able to use the Internet on the train again, as he often uses his commute to surf Facebook and catch up on e-mails.

However, marketing assistant Clara Goh, 34, said: "I don't care about not using my phone in the train, as long as they can find the source of the issue and fix it so it doesn't keep happening."