This was revealed by Defence Minister Ng Eng Hen on Facebook on Friday (Nov 11).

Together with a DSO National Laboratories team led by Chian Teck Keong, they identified a train with faulty signalling hardware as the cause of a glitch which affected service from Aug 28 to Sept 2, and from Nov 2 to 6.

"In modern battles, the opponent who rules the airwaves has the decisive advantage," Mr Ng said. "We have many professionals in DSTA and DSO National Laboratories who spend a good part of their careers becoming experts in the field. 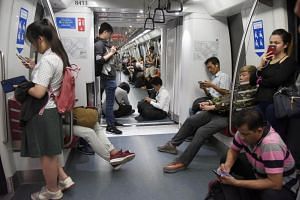 "So, when the Circle Line had problems with signal interference, it presented an opportunity for them to help and put their expertise to good use."

The engineers first showed that radio signals could disrupt trains.

"But where were the rogue signals coming from? Like good detectives, they analysed the clues, eliminated other suspects and caught the culprit - train PV46, carrying faulty hardware," the minister said.

The mysterious glitch was initially attributed to several causes - from a recent software upgrade to telecommunication signal interference to sabotage.

There was no shortage of theories from netizens either, with some saying half in jest that since the first episode was during the Hungry Ghost Month, paranormal mischief was at play. Others cited manga monsters, as the Pokemon Go craze was then at its height.

The signal interference first appeared on Aug 28, and persisted till Sept 2, when it ceased as suddenly as it started.

Over those six days, rail operator SMRT, suspecting a new software, rolled back the update, but the glitch continued.

Telco signals were switched off along certain stretches of the line, but before any findings could be made, the glitch stopped.

It then reappeared on Nov 2, causing a serious service disruption during the morning peak. This time, the operator and the LTA sought a total shutdown of telco services along the entire line. The glitch did not go away.

The Straits Times understands the DSTA took just one weekend to crack the case.

National University of Singapore transport researcher Lee Der-Horng said: "It is a relief to know the cause has been identified. However, it also makes us wonder if our train operators and LTA have the required expertise in trouble-shooting faults.

"Moreover, the quality control procedures before the train was delivered may need to be tightened up further."

Circle Line user Ashley Wu, 35, said it was "moderately efficient" for the investigators to have cracked the case in a week.

The sales manager said her confidence int he line had not been affected, although commuting without phone access "was very boring".

"But I'd be very worried if it happens again," she said. "I would then lose my confidence, I think."